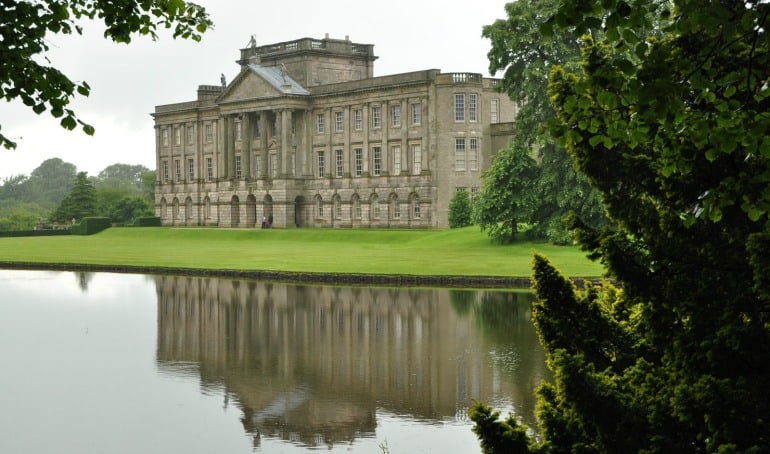 Austen (1775-1817) never revealed which—if any—of England’s stately homes was her inspiration for Mr. Darcy’s Derbyshire estate. But some believe that one historic mansion, Wentworth Woodhouse, is the real-life Pemberley.

Now Britain’s government is earmarking $9.48 million for the restoration of the sprawling 18th-century dwelling.

However, according to the Jane Austen Society of the United Kingdom, the Wentworth–Pemberley connection is as fictional as the book itself because there is no evidence Austen ever traveled as far as the estate’s Yorkshire location.

There is also another reason why Austen would not have chosen Wentworth as a model for Pemberley. Europe’s largest private home, the mansion is sitting on 82 acres of land and is believed to have more than 350 rooms—much too grand for Mr. Darcy, whose fortune wouldn’t be sufficient to own and run such a vast estate.

“Jane Austen, herself only too keenly aware of the value of money, and of the need for veracity, would have been savvy enough to know that a building the size of Wentworth … could not possibly have been supported on Mr. Darcy’s reported income of a mere £10,000 per annum,” UK’s Jane Austen Society noted.

Over the years, other stately homes have been suggested as the inspiration for Pemberley. One of them is the 16th-century Chatsworth House in Derbyshire, where the 2005 version of Pride and Prejudice was filmed.

However, Joan Klingel Ray, the author of Simply Austen, one of Simply Charly’s Great Lives series books, doesn’t think Pemberley is based on Chatsworth, the historic seat of the Duke of Devonshire. “When Darcy was worth £10,000 per year, the Duke of Devonshire was worth £100,000 per year. So it never seemed to me that Austen used the Duke’s home for Pemberley,” she said.

We may never know for sure if Pemberley was modeled after a real house Austen might have seen on her travels, or whether it was a figment of the author’s vivid imagination.