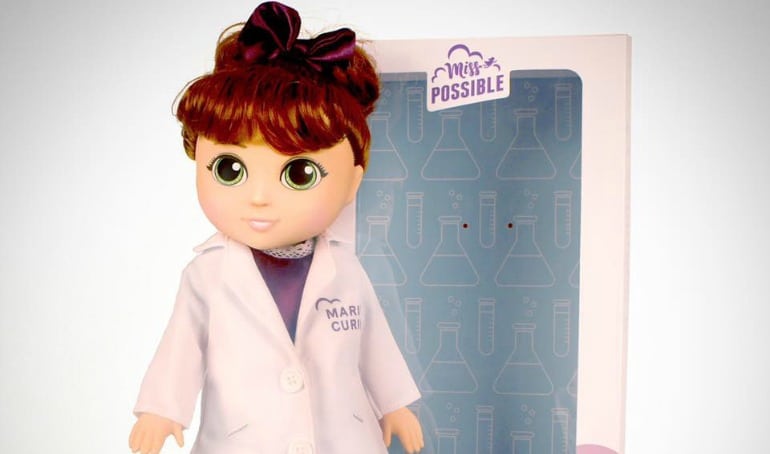 All Dolled Up, Marie Curie Will Inspire Future Scientists

When she was a young girl growing up in Warsaw, Maria Sklodowska (1867–1934) had an insatiable appetite for learning—she dreamed of becoming a scientist. This was not an easy feat to accomplish; not only was Maria’s family poor, but in the 19th century Poland women were not allowed to obtain advanced degrees in fields like science or medicine.

Eventually, through hard work and determination, Maria did achieve her goals: she enrolled in Sorbonne University in Paris, where she obtained two Master’s degrees—one in physics and the other one in math. By the time she married a fellow scientist and became known as Marie Curie, she had been conducting groundbreaking research on radioactivity. This work led to the discovery of polonium and radium, as well as the development of X-rays. In 1903, she became the first woman in history to receive, along with her husband Pierre and physicist Henri Becquerel, the Nobel Prize in physics. Eight years later, another Nobel, this time for chemistry, followed. There’s no doubt that Curie’s contributions were truly remarkable, even though she often had to navigate the inhospitable realm of male-dominated science.

In the eight decades since Curie’s death, women have made major strides in the field of chemistry and physics. Many, however, still face numerous hurdles: they constitute only 24 percent of the overall Science, Technology, Engineering and Math (STEM) workforce in the United States.

Now an Illinois company called Miss Possible has found a novel way to encourage girls to study science and engineering. It is seeking crowdfunding to manufacture a Marie Curie doll, the first in the line that will ultimately include other high-achieving female role models, such as Bessie Coleman, the first female African-American pilot, and Ada Lovelace, the world’s first computer programmer.

The dolls will contain interactive apps to teach the girls some of the skills inspired by the person’s achievements. A Curie doll, for example, will show them how to make a compass, even though Curie didn’t invent this navigational tool (the ancient Chinese did) and we don’t know whether she ever used one.

So what would Curie make of her namesake doll? We can only speculate, but we do know that she was a great supporter of women’s rights and advancement of female scientists.

And she did try to inspire women to overcome societal prejudices in order to achieve their goals:  “We must have perseverance and above all confidence in ourselves,” she once said. “We must believe that we are gifted for something and that this thing must be attained.”