MAIN MENU
Technology Thomas Edison
One of the most influential American inventors of all time, Thomas Alva Edison (1847—1931) is responsible for the creation of several devices that shaped the face of modern technology. Most famous for his invention of the first practical light bulb, Edison was also a shrewd businessman who bridged the gap between design and large-scale manufacturing.… 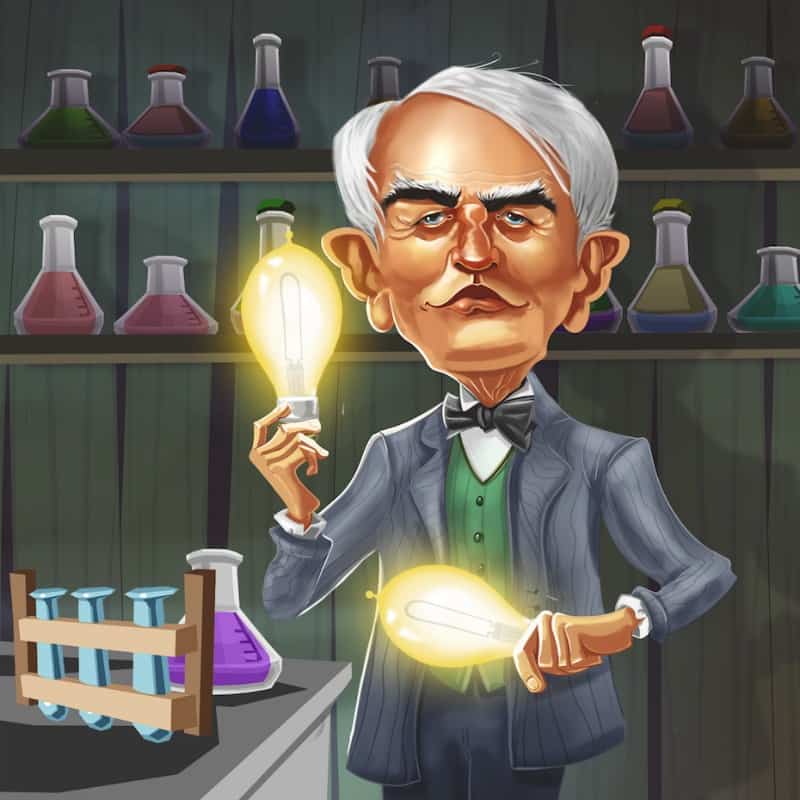 American inventor and businessman; a central figure of the Second Industrial Revolution.

Born in Milan, Ohio in 1847, Edison was a sickly youth who lost three siblings by the time he reached adulthood. He did poorly in school, and after a schoolmaster called him “addled,” Edison’s outraged mother withdrew him from school and began to teach him at home. It was Nancy Edison who sparked Thomas’s interest in science when she presented him with a chemistry textbook that described how to do experiments at home. By the age of 10, Edison built his first primitive laboratory in his parents’ basement.

Around the age of 12, Edison began to lose his hearing. Theories differ on the cause: Edison himself believed it was a conductor pulling him into a moving train by his ears that did it, but today experts believe it may have been a genetic disease. He never went deaf, and in fact enjoyed his poor hearing, stating that it made it easier to concentrate on his experiments without being distracted. Even at an early age, Edison was a determined businessman: at 12, he took a job selling candy and newspapers aboard the Grand Trunk Railroad. Where other children might have seen only a source of additional income, Edison saw a business opportunity. He set up a laboratory and a printing press in a baggage car, where he produced the Grand Trunk Herald, which he sold to customers for only a penny. This business venture came to an end when an accidental fire destroyed his workspace.

Let it never be said that Thomas Edison’s career didn’t get off to an exciting start. In 1862, Edison rescued the three-year-old son of J.U. MacKenzie, a stationmaster and telegraph operator, from being run over by a boxcar. A grateful MacKenzie offered to teach Edison telegraphy, an offer that Edison was happy to accept. While continuing his private experiments, Edison began taking telegraphy jobs around the country.

Edison retired early in 1869, intending to devote himself full-time to inventing—a bold move that backfired when his first patented invention, the electric vote recorder, was a complete flop on the market. Bitterly disappointed, Edison decided he would never again invent a device that people didn’t want- or, more precisely, that people wouldn’t buy. Edison was resolved not to be a starving scientist, and the vote recorder incident had a blatant influence on his marrying science with economics. For the rest of his life, Edison was determined to invent machines that would not only be revolutionary, but profitable.

The development of the telegraph marked a period of technological expansion in the United States, and it was a wave that Edison was fit to ride. His next invention, the Universal Stock Printer, was vastly more successful than the vote recorder, and was part of a series of patents for which Edison earned $40,000. He used the money to move to Newark, New Jersey, and set up a laboratory/manufacturing plant. It was during this time in 1871 that Edison’s mother died, and later that year he married his first wife, former employee, Mary Stilwell.

The 1870s were an extremely profitable decade for Edison. He opened another laboratory in Menlo Park and invented several devices that brought in money. It was not until 1877, however, when Edison first began to make headlines with the invention of the phonograph, the first practical sound recording device. The invention seemed to arrive very suddenly, and the American public was highly impressed by it. Edison toured the country showing off the phonograph and was even invited to the White House to display it to President Hayes in 1878.

THE WAR OF CURRENTS

Edison next turned his attention to the development of an electric light system, putting the phonograph aside for almost ten years. The Edison Electric Light Co. was founded for this purpose, and eventually, Edison succeeded in 1879 with the development of the first incandescent light bulb. Although Edison cannot take credit for inventing the bulb alone- his work was built on the shoulders of countless others—he can be credited with refining the light bulb into a form that was safe and practical for public use. Edison wasn’t happy merely inventing the electrical system, however: he went on to make a business out of it, creating the first commercial electric power station in Manhattan in 1882.

Edison was not the only one developing an electrical system, however. Edison’s direct current system or DC found itself challenged by the alternating current system or AC, developed by Nikola Tesla, one of Edison’s own mistreated former employees. Edison had promised Tesla $50,000 if he could redesign Edison’s direct current system to be more efficient; when Tesla did so successfully, he went to collect his money, only to be told by Edison that he did not “understand our American humor.” The dejected Tesla went on to improve the European-born AC electrical system, which was both cheaper and more efficient than DC, and found himself backed by financier George Westinghouse. Tesla and Westinghouse meant to use AC to provide low-cost power to customers.

Edison and his backers, seeing a direct threat to their electricity monopoly, carried out a fierce and bitter campaign to discredit Tesla’s AC as harmful and unsafe. He financed and recorded the executions of several stray animals via AC electrocution, including the now-famous film of Topsy the elephant being electrocuted to death. Edison also (unsuccessfully) tried to spread the term “Westinghoused” as a synonym for electrocution. So desperate was Edison to smear AC that he was even willing to compromise his own beliefs; despite formerly being opposed to capital punishment, Edison funded the creation of the first electric chair using AC electricity in an attempt to turn the public against it.

In the end, Edison’s attempt to destroy AC failed, and AC soon surpassed DC as the primary form of American electricity. Tesla, meanwhile, died penniless and obscure, having sacrificed the royalties he would have obtained from AC in order to assist Westinghouse in promoting its use.

Despite his loss of the War of Currents and the death of his wife in 1884, Edison went on to enjoy a fruitful and prolific inventing career. He remarried in 1886 and founded dozens of other companies to capitalize on his inventions, which were eventually reorganized into Thomas A. Edison Inc. His involvement in the creation of early motion picture projectors led to fierce legal battles with competitors over their use in motion picture filming.

When World War I broke out, Edison devoted his time to naval research for the US Navy, mainly involved in submarine detection. He lived to see the end of the war in 1918, but his health began to fail in the 1920s, and he finally died in his sleep in 1931.