MAIN MENU
Napoleon Bonaparte Politics
One of the greatest military and political leaders in European history, Napoleon Bonaparte (1769–1821) is best known in the popular imagination as the short, stern general who overachieved to make up for his height. In reality, he was a true military genius. While he was unable to hold onto his Empire, this fact did not… 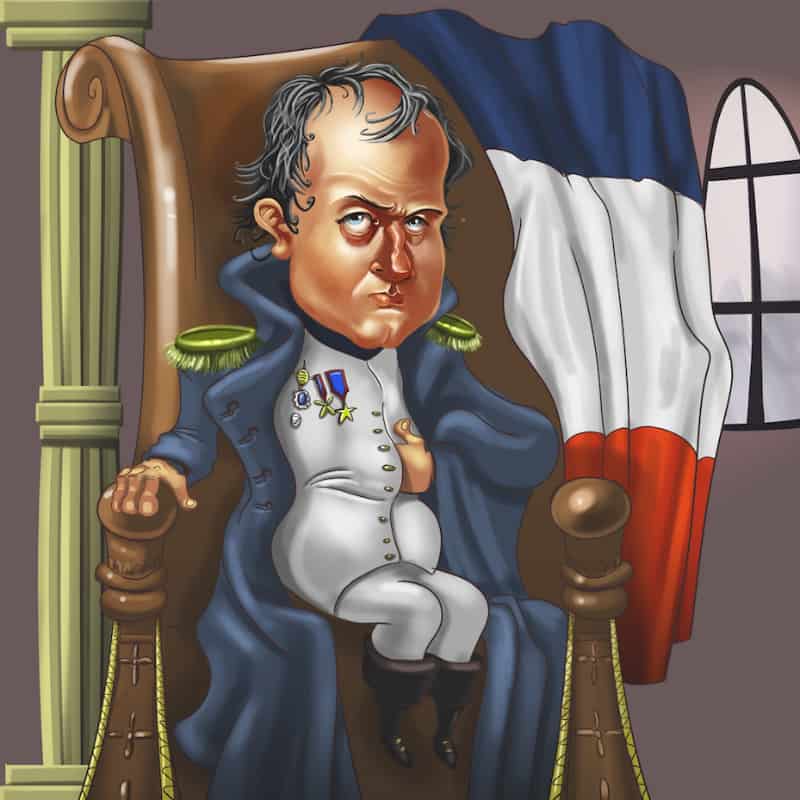 Military general and the first Emperor of the French.

Napoleon Bonaparte was born Napoleone Buonaparte in Corsica, one year after the island was given by Genoa (in present-day Italy) to France. He came from a family of minor Italian nobility with origins in Tuscany and Florence; his father Carlo was an attorney who represented Corsica in the court of King Louis XVI. As the son of an affluent family, Napoleon was able to attend military school from the age of nine, and although he was frequently mocked by his schoolmates for his thick Corsican accent and difficulties with French spelling, he did very well.

From his first military school, he progressed to the Royal Military School of Paris, from which he graduated a year early. At only 16, he accepted a commission as second lieutenant in an artillery regiment, where he served until the French Revolution erupted four years later, in 1789. He spent several years in tumultuous Corsica, which had not been a part of France long, meaning that the various factions in the conflict were able to find supporters there. With the help of his connections, young Napoleon was able to take command of the artillery regiment attached to the Revolutionary government’s forces stamping out a reactionary revolt in Toulon, where the rebels were assisted by British troops. Bonaparte was wounded during the successful recapture of the city and promoted to brigadier-general. More importantly, his performance on the battlefield made him known to the Committee of Public Safety that reigned over France at the time. He struck up a friendship with Augustin Robespierre, younger brother of the powerful revolutionary leader, Maximilien.

The chaotic years of the Revolution were useful to Napoleon. He successfully fought off an attack by counter-revolutionaries upon the National Convention in 1795. His growing fame allowed him to be introduced to Josephine de Beauharnais, former mistress of Paul Barras, a leading politician of the time. He married her shortly after the meeting, and only days after the wedding he was given command of the French forces tasked with an invasion of Italy, which he saw through successfully. He was nicknamed “the little corporal” not only for his famously small stature but because his style of leadership encouraged camaraderie and mutual respect among the soldiers, though without compromising his authority.

Napoleon refused to dethrone the Pope in conquered Italy, but was not punished for it; indeed, he soon led his armies to invade Austria, forcing a treaty there before moving on to conquer Venice, which had remained a free city for more than 1000 years. Napoleon was quickly recognized as a military genius, adaptable, creative, and extraordinarily knowledgeable about tactics and strategies.  His success brought him great fame, and the newspapers he had published for his troops were circulated among the French citizenry as well. However, when he asked to join the Directory, which held executive power in France, he was refused, undoubtedly because he was too influential as it was; he took the rejection personally. The French invasion and seizure of Egypt, Malta, and Damascus was not only led by him but was also his idea. It did not go as well as he had hoped, and in 1799 he was ordered to return to France — leaving his troops behind — because political struggles and military defeats were weakening the nation, making it vulnerable to invasion by its enemies.

By the time he returned, the Republic was facing bankruptcy. One faction of the Directory approached Bonaparte, seeking his support for a coup to overthrow the government. That support he lent—and contrary to the expectations of those who asked for his help, he was successfully elected as First Consul (the head of state) and was made First Consul For Life the following year. He immediately began to reform the government, making it more efficient and centralized, and sought reconciliation with the Catholic Church. Perhaps most importantly, he instituted a system of codified laws—the Civil Code or Napoleonic Code, still the basis of law today in Louisiana and some other former French holdings—which was prepared by a committee of legal experts rather than merely putting into law centuries of conflicting traditions.

His military success continued as well, as he re-conquered Italy, which the Austrians had taken while he was in Egypt. When war with Britain became inevitable, he negotiated the Louisiana Purchase, selling French holdings in North America to the young American government. After surviving an assassination attempt launched by the Bourbons (the royal family of France), he declared himself Emperor and a hereditary monarch, so that his death would not bring the Bourbons back to power.

Over the next few years, he fought various alliances of European powers, with Britain his most dogged opponent; Britain was unwilling to recognize the validity of a republic and considered Napoleon a despot and usurper. He may well have succeeded in fending off all such attacks, except that in 1812, he made the enormous error of invading Russia, which was preparing to invade French-held territories to reclaim Poland. Military prowess did not prepare the French for the harsh Russian winter or the Russians’ startling scorched earth tactics, in which they burned their own lands as they retreated, leaving the French army with no food or other vital supplies. Though the French continually advanced, they also moved farther from friendly territory, becoming gradually more famished and weary. Even the capital city, Moscow, was burned so it would not fall into French hands. Napoleon was, for once, unprepared and the French armies withdrew from Russia.

The next coalition of European powers was better able to handle France, and the French military was soon surrounded by a force that outnumbered it five to one. Napoleon abdicated, but his enemies demanded an unconditional surrender. His marshals refused to march on Paris after it was occupied by European forces. He finally accepted exile on the Mediterranean isle of Elba, still retaining the title of Emperor.

On Elba, he started a small navy and an army and ran his tiny nation in exile. Back in mainland France, the royalists and European allies restored Louis XVIII to power. Napoleon was able to escape from Elba long enough to gather an army and retake Paris, but only for 100 days. He was defeated by the British Duke of Wellington at the Battle of Waterloo and surrendered at last on July 15, 1815. This time, he was exiled to the island of Saint Helena, a British territory in the South Atlantic Ocean, where he received many visitors and was considered something of a tragic romantic hero by the intellectual elite of Europe and the French-Americans of Louisiana. He died of stomach cancer six years into this second exile.