MAIN MENU
Martin Heidegger Philosophy
Martin Heidegger (1889–1976) was a fascinating and controversial philosopher, known for both his highly original and challenging philosophical concepts, as well as his association with and sympathy for the Nazi Party during World War II. 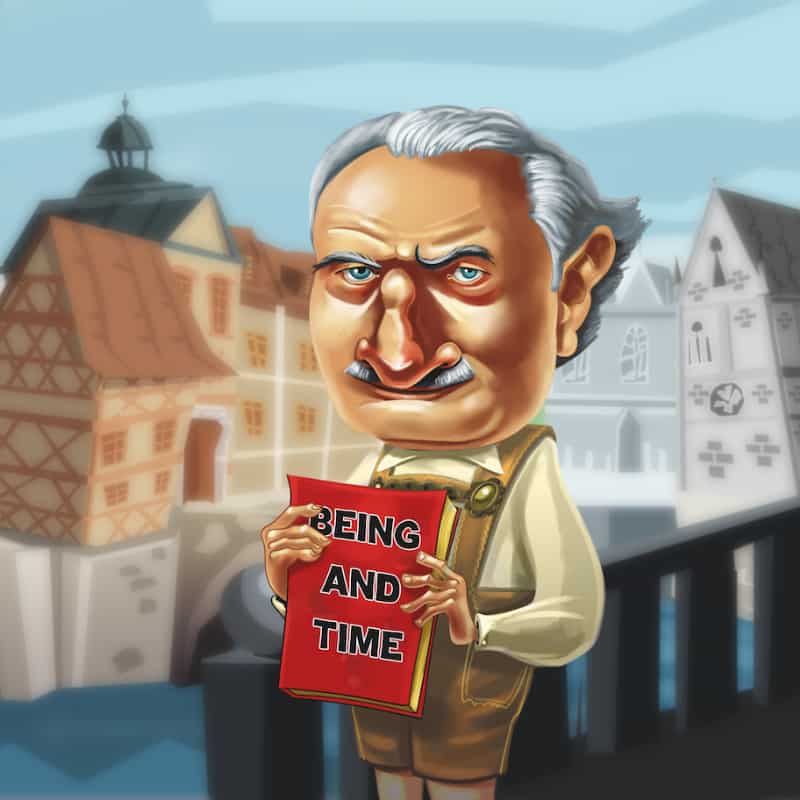 One of the forerunners of existentialism, Heidegger’s work on metaphysics and ontology, changed the course of Western philosophy.

You cannot have a philosophical conversation without mentioning the name Martin Heidegger. Heidegger is known as one of the most influential Western philosophers, and people still ponder his study of Being today. He sought to change how Westerners view Platonic metaphysics, and his impact reached beyond philosophy into theology, literature, history, and psychology. His most famous book, Being and Time, is recognized as one of the most significant philosophical works of the 20th century.

Martin Heidegger was born in Meßkirch, Schwarzwald, Germany, on September 26, 1889. His parents were Friedrich and Johanna Heidegger, who were Roman Catholics that raised their son in humble circumstances.

Heidegger attended local schools, and his instructors and peers observed his intellectual talent. Despite the recognized intelligence, his family was too poor to afford a university education. He entered the seminary but then rejected it because of health issues. Following his departure, he earned a scholarship from his parish to attend the University of Freiburg.

He studied theology for a while, then switched his focus to philosophy. His doctoral studies were completed under Heinrich Rickert, the German neo-Kantian, and Edmund Husserl, the founder of phenomenology. He received his doctorate in 1913 following his dissertation on psychologism, which is a philosophy that perceives epistemological issues to be solvable through a psychological study on the development of mental processes. His dissertation was titled, Die Lehre vom Urteil im Psychologismus: ein kritisch-positiver Beitrag zur Logik, meaning, The Doctrine of Judgment in Psychologism: A Critical-Positive Contribution to Logic.

Two years after completing his doctoral research, Heidegger earned his teaching habilitation by writing a thesis on the medieval scholastic theologian, Duns Scotus.

In 1917, Heidegger reached a pivotal point in his life. After studying the works of Protestant Reformers such as Martin Luther and John Calvin, Heidegger departed from the Roman Catholic faith of his youth. Thereafter, he married a Lutheran woman named Elfriede Petri. The newly wedded couple would soon bear two sons.

After the Great War, he took a lecturer position at the University of Freiburg in 1919. His courses attracted bright students because of his brilliant interpretations of Aristotle and Augustine, as well as analyses of occurrences in everyday life. The lectures he gave were in the 1927 release of Sein und Zeit or Being and Time.

In Being and Time, which is regarded as Heidegger’s magnum opus, he sought to answer the question of what Being fundamentally was. Here, he argued that Western philosophers misunderstand Being, according to Plato. As opposed to applying it to individuals, Heidegger argued it is better to apply it in the macro sense of Being in the world.

Descartes believed our minds were more effective in understanding the world around us than our senses and that the observer of an object is utterly separate from the object they are looking at. Heidegger criticized philosophers of the belief that people disconnect from the world. The term Dasein, translated as “Being-in-the-world,” denotes that humans and the objective world are inseparable. Being fundamentally requires an engagement with our world.

As for time, Heidegger proposes that time finds its meaning in death. We perceive time only through the lens of temporality as we live in the present while planning for the future.

During his tenure as a lecturer and associate professor, Heidegger continued to develop his ideas on the phenomenological thoughts his doctoral advisor, Edmund Husserl, founded. He gained a greater comprehension of phenomenological reduction, which is a method of stripping away preconceptions of various phenomena to reveal their primordial truth. You can see this in Being and Time and many of his other writings trying to deconstruct Western metaphysics.

In 1928, he accepted the chair of philosophy at Freiburg, previously held by Husserl, and later served as rector from 1933 to 1934. He published various articles and even tried writing a sequel to Being and Time, although the book never manifested itself.

In May of 1933, one month after Heidegger became rector of the University of Freiburg, the Nazi party had demanded the removal of Jewish ideas in their academic institutions. In the name of the “national revolution,” Heidegger assisted establishing Nazi doctrine within the university system. In the fall of that same year, Heidegger engaged in a lecture tour, speaking on Hitler’s proposal to withdraw from the League of Nations.

Though he resigned from the Nazi party in 1934, Heidegger continued to support many of Hitler’s policies. His professorship was revoked from 1945 to 1950 for his support of Hitler.

Still unrepentant, in his Introduction to Metaphysics (1953), Heidegger exalted the “truth and greatness of National Socialism.”

In 1946, Heidegger wrote the “Letter On Humanism.” It was here where many commentators suggested his philosophy began to swerve toward mysticism. He rejects reason, referring to it as “stiff-necked,” and uses nearly unintelligible phrases which are still cause for rumination among many of today’s philosophers.

Heidegger wrote “The Question Concerning Technology” in 1949. In this piece, Heidegger argued that modern society and the war effort had turned human beings into mere “stuff,” simple objects of utility. “Modern man takes the entirety of Being as raw material for production and subjects the entirety of the object-world to the sweep and order of production,” he proclaimed. His conviction was that modern industrialism was to blame for such sins. Throughout the 1950s, Heidegger continued to write extensively on this theme of technology.

After writing on various topics during the 1960s, Heidegger could not shake his past pro-Nazi statements. At a theology conference in 1964, one of his former students approached the podium to address the crowd. This student repeated a quote from a speech Heidegger gave to university students:

Not theorems and ideas be the rules of your being. The Fuhrer himself and alone is the present and future German reality and its law. Learn ever deeper to know that from now on each and every thing demands decisions, and every action, responsibility. Heil Hitler!

Many scholars felt that Heidegger’s pro-Nazi period was only a lapse in his thinking. Regarding his failure in his embrace of Nazi policy, Heidegger once quoted the poet, Paul Valéry, “He who thinks greatly must err greatly.”

Heidegger was one of the most influential philosophers of the twentieth century. His influence over existentialism and on various fields within psychology and theology have made him an undeniable force in 20th-century thought.

Heidegger died on May 26, 1976, in his birth town of Meßkirch, Schwarzwald, Germany.