MAIN MENU
Chemistry Marie Curie Physics
Marie Curie (1867–1934) whose work changed our modern understanding of matter and energy, was the first woman to win a Nobel Prize and the only woman to win the award in two different fields. Along with her husband Pierre, Curie’s efforts led to the discovery of polonium and radium and, after Pierre’s death, the development… 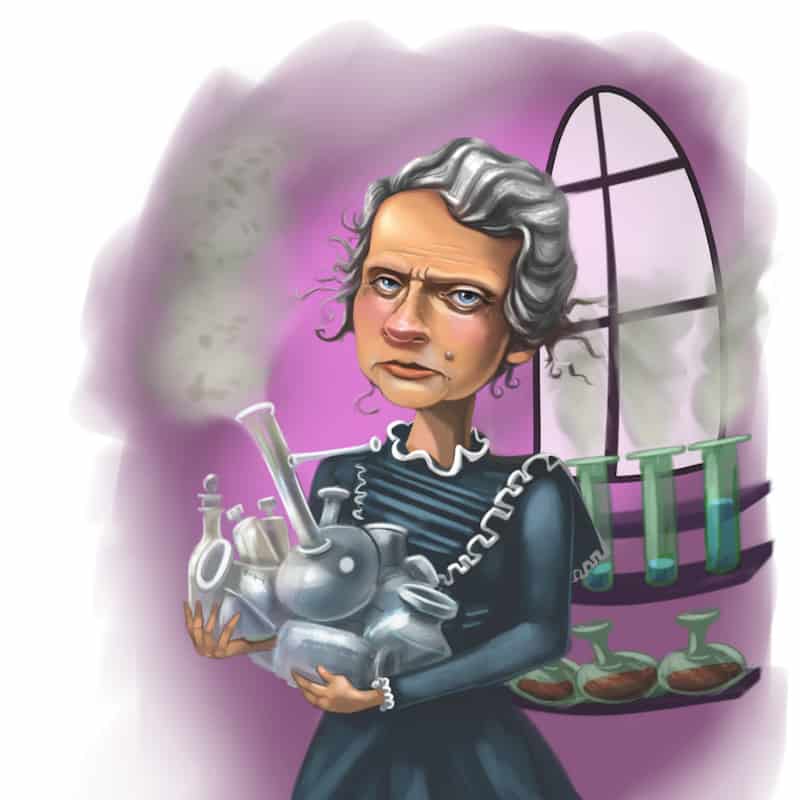 Marie Curie was born on November 7, 1867, in Warsaw, Poland as the youngest of five to Ladislas and Bronsitwa Sklodowska. Ladislas was a math and physics teacher at a secondary school, and Bronsitwa was the headmistress of a private school. Because they were teachers and Polish patriots, the family struggled financially. While Curie’s inquisitive mind followed the interests of her father, Bronsitwa caught tuberculosis and passed away when Curie was only eleven. She graduated high school with the highest honors at the age of fifteen.

Curie developed a nervous illness, and her father sent her away to live with her cousins in the country for a year. After her recuperation, since she could not attend the male-only University of Warsaw, she was instead forced to continue her education through underground, informal classes called Warsaw’s floating university, chased by the Czar’s police. Her family did not have the funding to send her abroad to obtain her degree though it was a dream of hers and her sister Bronya. Together, they decided to work each other’s way through school, one at a time.

For five years, Curie worked as a governess and tutor, studying physics, chemistry, and math in her free time. She worked for the owner of a beet-sugar factory, also tutoring children of the Polish peasant workers to read, a risk punishable by Russian authorities. She also took chemistry lessons from a chemist in the factory.

In 1889, she returned to Warsaw because her father was receiving a better salary as head of a reform school. He was able to send money to Bronya in Paris, allowing Curie secretly to study a chemistry course at a museum, which in reality was an illegal lab to train Polish scientists. In 1891, it was her turn to go finally to university on her carefully saved finances. She moved to study at Sorbonne, surviving on only buttered bread and tea, which was detrimental to her health. In 1893, Curie earned her degree in physics, and in 1894, she also earned a degree in math.

Around the time Curie received her degrees, she was commissioned to work on a study of steel and magnetic properties. Knowing she needed a lab to work in, a colleague introduced her to Pierre Curie, a French physicist. They became devoted to one another as well as science and were married in 1895.

Curie took on a project involved weak uranium rays, discovering that they always remain constant. She theorized that the rays came from the atomic structure of uranium, a revolutionary idea she coined as radioactivity. In 1897, she and Pierre had a daughter, Irene. Pierre’s father (a retired doctor) moved in with them to help raise Irene, and Pierre ceased his own studies to contribute to Curie’s radioactivity experiments. They worked with pitchblende and discovered radium.

In 1903, Curie became the first woman to win a Nobel Prize. She won for physics, along with a prestigious honor, for her work on radioactivity. This gave her international recognition, and she used the prize money to continue research. She also went back to school to gain her doctorate of science and became the first woman to achieve this success.

In 1904, her daughter Eve was born. This joy was followed by Pierre’s tragic death in 1906 when he stepped in front of a horse-drawn wagon in Paris. Curie took over his post as Professor of General Physics in the Faculty of Sciences and Head of Physics Laboratory at the Sorbonne making her the first female professor there, as well.

In 1911, Curie won her second Nobel Prize, this time for chemistry. Her husband was honored for his contributions to her discoveries of radium and polonium. Curie is the first scientist to win two Nobel Prizes. She was invited to attend the first Solvay Congress in Physics, among Albert Einstein and Max Planck.

In 1914, World War I broke out, and Curie threw herself into helping her country. She pioneered portable X-ray machines for the field. After the war, her fame and resources helped her travel to the United States in 1921 and 1929 to raise funds for a radium research base in Warsaw.

In 1934, Curie traveled to Passy, France, to rest and regain her health. However, she had already overexposed herself to radioactive materials and was known to carry around test tubed of radium in her lab coat pockets. She died on July 4, 1934, of aplastic anemia. Her final remains were buried in the Pantheon in Paris, the first and only woman to be laid there. Her daughter Irene carried on the family legacy and won a Nobel Prize in chemistry in 1935.