MAIN MENU
Art Leonardo da Vinci
Throughout human history, perhaps no man has ever displayed as much creative genius as the Italian polymath Leonardo da Vinci (1452–1519). An inspired painter, inventor, and writer, Leonardo is widely considered to be the exemplar of the Renaissance movement. Almost entirely self-taught, he produced both masterful paintings and mechanical designs that were centuries ahead of… 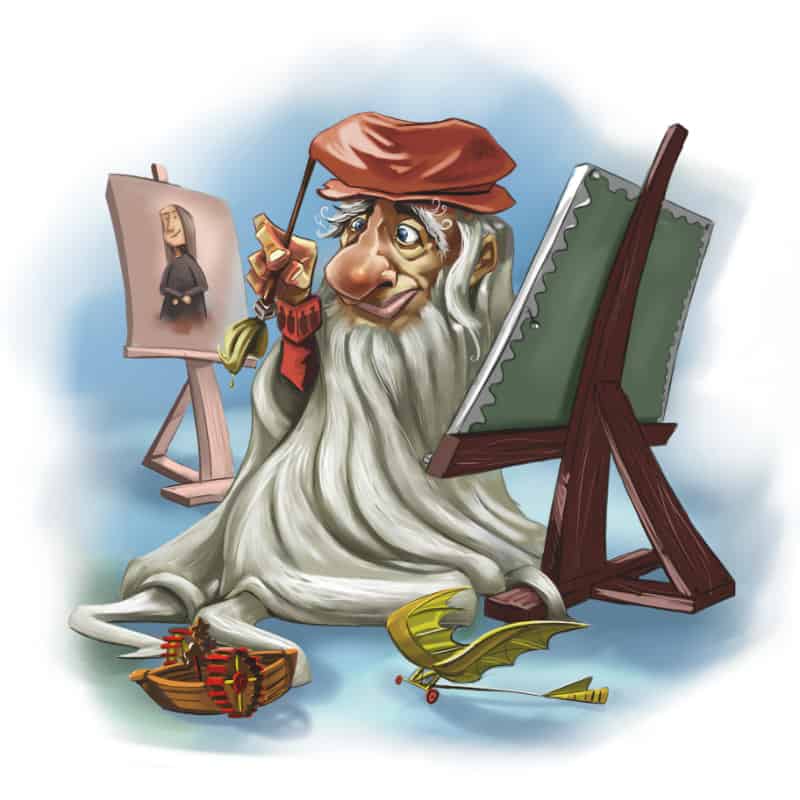 Italian artist, inventor, writer, and polymath. One of the foremost minds of the Italian Renaissance.
Main accomplishments:

Very little is known about the early years of da Vinci’s life: we know that he was born out of wedlock between the notary Piero da Vinci and a local peasant woman named Caterina, in the small town of Vinci in the Republic of Florence. He was educated from a young age, and at fifteen he was apprenticed as a garzone (studio boy) to Andrea del Verrocchio, a famous painter/sculptor who was at the forefront of the early Renaissance. It was during his apprenticeship to del Verrocchio that Leonardo picked up many elements that would become prominent in his own work, primarily recognizing the intricacy of the human physical design. In 1472 da Vinci was entered in the painter’s guild in his own right, but even after completing his apprenticeship he continued to work in del Verrocchio’s workshop for several years, collaborating with his master on a few paintings.

At the age of 22, Leonardo was accused and acquitted of sodomy; his sexuality remains a hotly debated topic today. His writings paint him as a deeply sensitive man; he once wrote that he disliked even taking the milk from cows, considering it as stealing from the calves. He frequently wrote about the moral and ethical issues of his day, and according to biographers would sometimes purchase caged birds for the express purpose of setting them free.

It was not until 1478 that da Vinci struck out on his own, setting up his own studio. In 1481, he received his first commission: to paint an altarpiece for the monastery of San Donato a Scopeto. This first painting, Adoration of the Magi, was left unfinished when Leonardo decided to travel to Milan. He was notorious for being unable to finish paintings, finding the physical act of painting itself to be tedious.

Leonardo’s journey to Milan was commissioned by Lorenzo de Medici, a prominent Florentine nobleman who wanted da Vinci to craft a silver lyre and bring it to the Duke of Milan as a peace offering. Leonardo fulfilled the request, but also wrote the Duke a letter explaining his engineering and technical prowess. The Duke, impressed, took Leonardo into his service as an architect and military engineer.

Between 1482 and 1499, Leonardo lived in Milan and completed some of his greatest projects, including The Last Supper and The Virgin on the Rocks. The Duke commissioned him to work on several other non-painting projects as well, including a large bronze equestrian monument known as the “Gran Cavallo.” The monument was never finished, as it was eventually destroyed by invading French troops who used it as target practice. The unfinished monument was a source of ridicule towards Leonardo by Michelangelo; according to their biographer Vasari, the two great painters had an “intense dislike” towards one another.

The French invasion of Milan in 1499 led Leonardo and his associates to flee to Venice, where he again found work as a military engineer. The following year he returned home to Florence, where he entered the service of Cesare Borgia, the son of Pope Alexander, and accompanied his patron on his travels throughout Italy. It was during this second Florentine period that Leonardo produced perhaps his most famous painting, the Mona Lisa. In 1506 Leonardo found himself again returning to Milan, this time entering into the service of the city’s new French ruler, King Louis XII. For the next six years, Leonardo split his time between Milan and Florence, frequently traveling between the two cities along with his pupils.

In 1513, the French were expelled from Milan, and Leonardo decided to make it to the Vatican, where the likes of Raphael and Leonardo’s rival Michelangelo were already working. His friend Giuliano de Medici offered him living space, but Leonardo did not receive much work in Rome— his only contribution of note was to be part of a committee that relocated Michelangelo’s David statue against the artist’s will.

In 1515 Leonardo left Italy for good, having been called for by the King of France himself, Francis I. Leonardo served as the king’s personal painter and engineer while living in the small village of Cloux, where he eventually died in 1519—supposedly in the arms of the king himself. Leonardo was buried in the church of Saint Florentin, which was destroyed during the French Revolution; today da Vinci’s gravesite remains unknown.