MAIN MENU
Economics John Maynard Keynes
The policies and tactics developed by John Maynard Keynes (1883–1946) in the early part of the 20th century continue to impact the global economy today, after having been revived during the 2008 financial crisis. He was the creator of “Keynesian economics,” which argued in favor of a mixed economy consisting of both public and private sectors. 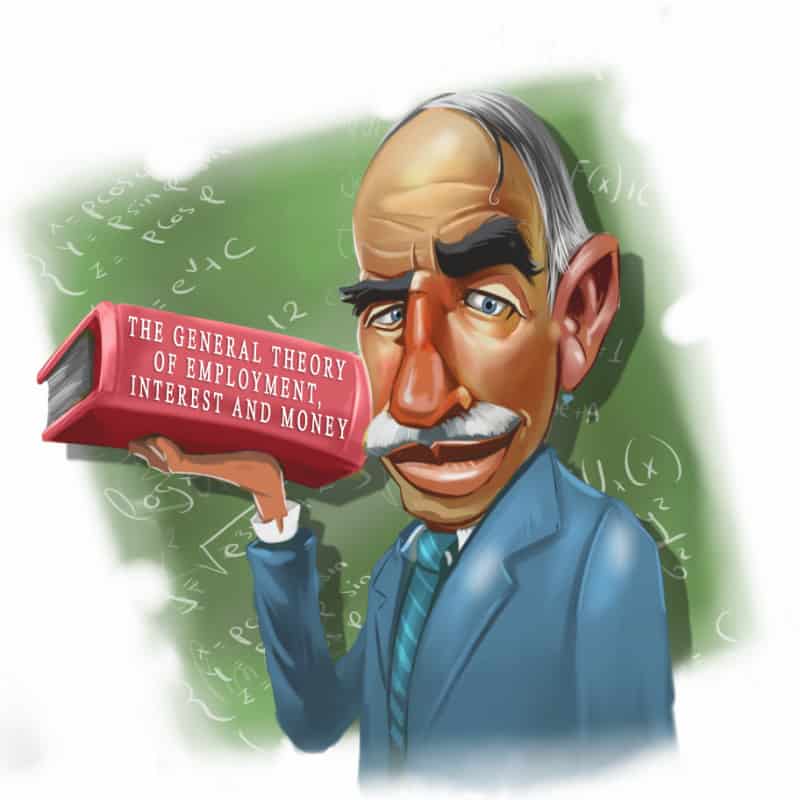 British economist and philosopher. Creator of the school of Keynesian economics.

The son of an economics lecturer and author Florence Ada Brown, John Maynard Keynes, was born to a semi-wealthy British family in Cambridge. Growing up, he excelled in science and mathematics, becoming the envy of his peers. He attended King’s College in Cambridge, becoming President of the University Liberal Club, and graduated with a degree in mathematics.

Keynes found his first job in late 1906, becoming a clerk in the London India Office. While at first, he enjoyed his work, he soon found it tedious and used his frequent spare time to investigate probability theory. It was most likely his work at the India Office that inspired his first book, Indian Currency and Finance, published in 1913. In the same year, he accepted a position with the Royal Commission to investigate Indian finances.

Although he married a Russian ballerina Lydia Lopokova in 1925, Keynes carried on open homosexual relationships with several male colleagues during his time at King’s. He had a serious relationship with a fellow member of the Bloomsbury Group, the painter Duncan Grant, who would later serve as the best man at his wedding to Lydia.

1914 saw the beginning of the First World War, which wreaked havoc on world finances and upset Keynes both professionally and personally. “I am absolutely and completely desolated,” he wrote to English biographer and critic G.L. Strachey. “It is utterly unbearable to see day by day the youths going away, first to boredom and discomfort, and then to slaughter.” A year after the war began, Keynes took a position with Her Majesty’s Treasury. He proved to be a godsend for the Allied financiers: his bold and innovative economic strategies, including the invention of allied war loans, led to universal acclaim from his peers.

When the war ended with Germany’s defeat, Keynes was horrified by the terms of Germany’s surrender. British diplomat Harold Nicholson wrote that Keynes considered the “German Treaty” to be “immoral and incompetent,” at one point even threatening to resign his position in protest. Keynes fervently believed that the proposed Treaty of Versailles —the provisions of which required Germany to disarm, give up some territories, and pay reparations to certain countries—was far too harsh and would lead to disastrous consequences – a view that did not leave him popular with his superiors in the government. Although we now know that Keynes was correct in his predictions, he was unable to exert enough influence to prevent the Treaty’s enactment, and he eventually returned to Cambridge in disgust.

Despite his own attempts to let go, Keynes could not withhold his anger at the Treaty, and in 1919, the same year that the Treaty was signed, he wrote The Economic Consequences of Peace, the book that made him internationally famous. This work was heavily damning of the Treaty, which outraged the conservatives, who believed that Keynes was defending the same monsters who had started the war in the first place. Consequences virtually predicted World War II well ahead of its time, with Keynes writing: “If we aim deliberately at the impoverishment of Central Europe, vengeance, I dare predict, will not be limp.” The book’s publication made Britain’s government wary of Keynes, and it was not until World War II had passed that his predictions were given their due.

Since Consequences and Keynes’ subsequent reformative tracts left him unpopular in the government, he decided to turn to the private sector. He took on many different jobs at once and continued to write for magazines and newspapers while simultaneously making his name in London as a member of the Bloomsbury group. The rise of the Great Depression saw Keynes writing financial advice for both Britain and the United States. While not implemented, it was seriously considered by both nations and most likely laid the bedrock for future use of Keynesian ideas. Indeed, Keynesian economics has been credited as the theoretical basis for Roosevelt’s New Deal, which in turn led to the development of modern programs such as Social Security.

Keynes was fiercely critical of Britain’s use of the gold standard—another unpopular opinion, but one he crusaded nevertheless. Again, he was ultimately unsuccessful in his efforts, as Winston Churchill eventually restored Britain to the gold standard in 1925—a move that Churchill would later refer to as “the greatest mistake of my life.” It wasn’t until six years later that the British government eventually acted on Keynes’ advice and devalued sterling by 20%.

A heart attack in 1939 diminished Keynes’ ability to speak out during World War II as he had during its predecessor, but he wrote several letters railing against the internment by Britain of Jews fleeing Germany. He also made several trips to America to negotiate on Britain’s behalf. During this time, he was involved in matters of international currency, a discussion that would eventually lead to the creation of the International Monetary Fund and the World Bank. In 1942, he was awarded the title of Baron and took a seat in the House of Lords.

The final challenge of Keynes’ life was persuading America to lend postwar financial assistance to Britain, which had suffered heavy losses during the war. Despite his own frequently failing health, Keynes succeeded in his negotiations, and America granted a generous loan to Britain that may have saved the country. Although upset at how he saw America—as taking advantage of its strong economic position to exert influence over other countries—Keynes did not have much time left to address this issue. He died in bed in 1946, but his ideas would continue to influence global economics for at least another 30 years—and have seen a resurgence in the 21st century as well.