MAIN MENU
Jane Austen Literature
Though relatively unknown during her lifetime, Jane Austen (1775–1817) is among the most widely read novelists in English literature. Her literary classics, such as Pride and Prejudice and Sense and Sensibility, bridge the gap between romance and realism. 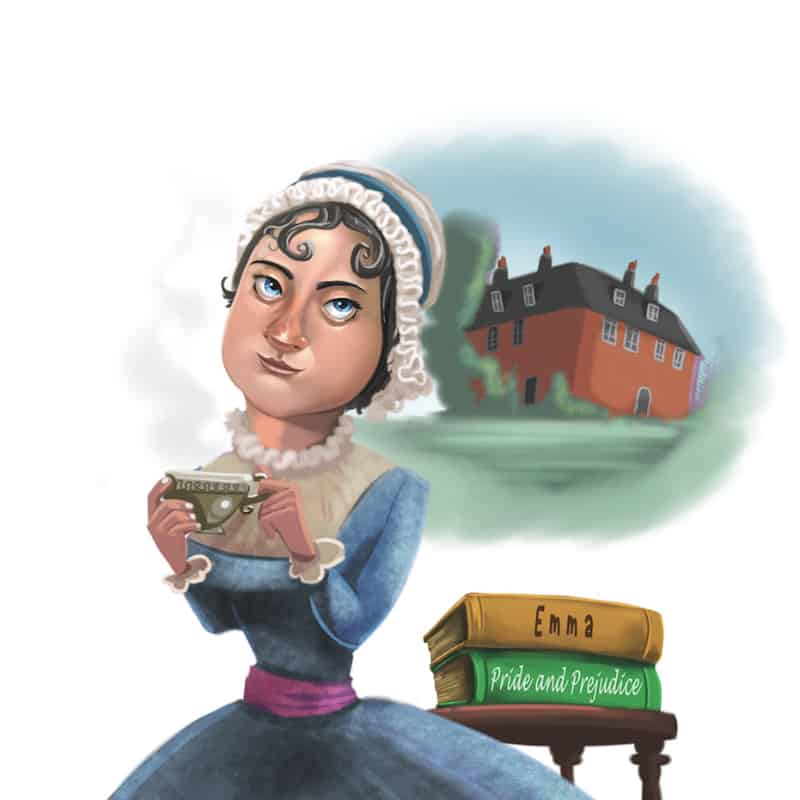 Though relatively unknown during her lifetime, Jane Austen is among the most widely read novelists in English literature. Her literary classics, such as Pride and Prejudice and Sense and Sensibility, bridge the gap between romance and realism.

Jane Austen was born in Hampshire, England, as the seventh of eight children. Her parents were George and Cassandra Austen, both of whom had ties to the aristocracy. George Austen was a clergyman at Steventon Rectory, who taught live-in students and had an extensive library, which were Austen’s primary sources of education. Austen only had one sister, Cassandra, and they were inseparable friends throughout their lifetimes. She died on July 18, 1817, at the age of 41, and was outlived by all of her immediate family members except her father, who died in 1805.

Austen’s parents encouraged her and her siblings to read from the library, and as children, they wrote and conducted plays and charades. Her family always supported her writing. In 1783, she, her older sister Cassandra, and their cousin Jane Cooper were sent to Mrs Cawley’s boarding school in Oxford, where they learned to sew and speak French. Austen’s father needed the extra rooms in their house and the profit they made from his live-in students. Their formal education here ended after a little over a year when they caught typhus. After a year recuperating at home, the girls were again sent to boarding school, this time with Madame La Tournelle at Reading Ladies’ Boarding School in what used to be Abbey Gateway. Here, they learned spelling, needlework, and French. They stayed for less than two years before Austen’s father removed them from the school because he felt she could learn more at home. Thus ending her formal education permanently.

Austen lived in Steventon, Hampshire until 1801, when she was 25. She moved with her mother, father, and sister to Bath, where they lived until George Austen passed away four years later. Each unable to own property during this period were forced into an unstable lifestyle of constant moving between the houses of family members. By 1809, her brother Edward, who had been adopted by wealthy relatives to inherit their fortune, settled them into Chawton Cottage in Hampshire where Austen wrote and published most of her works.

Austen learned much from her brothers. James, the firstborn who was ten years older than her, organized and directed plays, modeling playwriting for her. She kept notebooks in which she wrote her early works, now referred to as the Juvenilia.

Austen filled three volumes with Juvenilia between 1787 and 1793. These include Love and Freindship (intentionally misspelled as a parody), a satire titled History of England, and Lady Susan, an epistolary that her brother Henry renamed Catherine. Her notebooks also included sketches of what was to become Sense and Sensibility. One now resides in the Bodleian Library in Oxford, while the other two are on display in the British Museum in London.

By 1775, Austen was working on First Impressions (that became Pride and Prejudice), and Northanger Abbey, a satire on Gothic literature. Her most productive time for writing was while she was living at Chawton Cottage, which is when she published her first four books. Austen chose to publish anonymously, a standard for women in the early 19th century.

In 1795, Austen fell in love with Tom Lefroy, a neighbor’s nephew studying to be a barrister in London. The Lefroy family separated them because they were supporting him during his studies and found the romance impractical. Afterward, Jane and Tom were kept apart every time he came back to Steventon. In 1801, Austen experienced a new romance. Harris Bigg-Wither, a wealthy Oxford graduate and family friend, proposed to her. Austen agreed but rescinded the next day, and later in a letter to a niece gave the advice not to wed if affection is not present, a reflection of the characters in her novels. If Austen had married Bigg-Wither, it would have made her independent of her family’s finances, helped her mother and sister after their father’s death, and benefited her brothers’ careers.

While living in Chawton Cottage during her 30s, Austen began publishing her works anonymously. In 1816, she was afflicted with what biographers believe to be Addison’s disease and named her sister Cassandra as her heir. She continued to write, working on The Elliots and beginning Sanditon, which was never completed. Austen died July 18, 1817, at age 42, and her grave mentions nothing of her being an author. The first collected edition of Austen’s novels were published in 1833 by Richard Bentley, and they have never since been out of print.