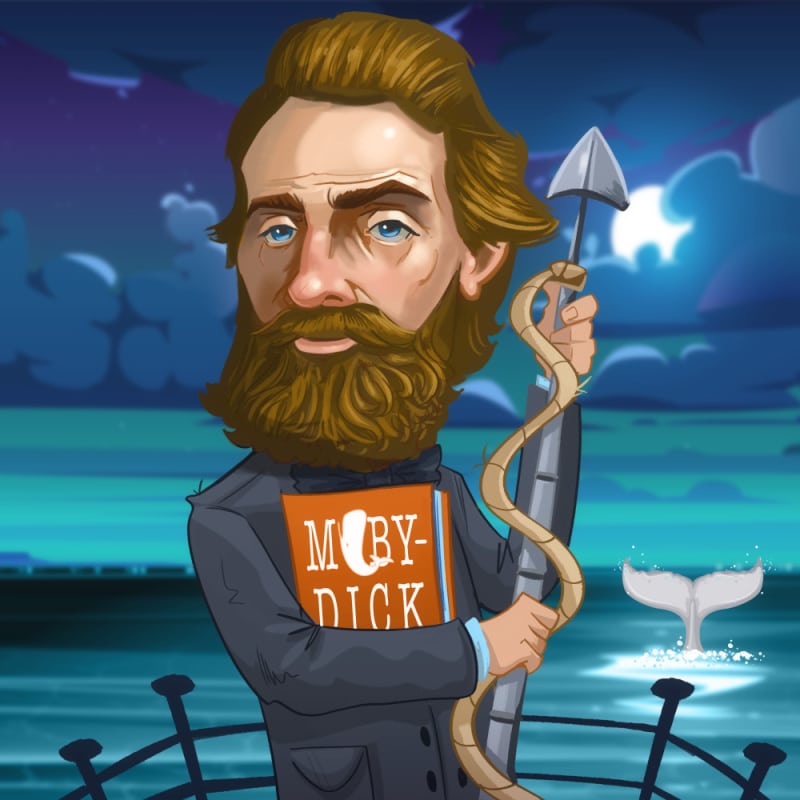 Herman Melville did not have a successful career by the standards of his day, yet people remember him as one of the greatest American writers of all time. His novel, Moby-Dick, barely sold copies in the 19th century but is now one of the world’s most popular literary works and widely regarded as “the great American novel.” Ever since the revival of Melville’s work following the Great War, his career has become a cornerstone of today’s fiction.

A descendant of Scottish and Dutch settlers, Herman Melville was born in 1819 in New York City. He was the third of eight children to Allan Melvill and Maria Gansevoort Melvill.

Melville’s father often dragged his family through the mud of financial ruin. Although he owned a successful import business, his poor decisions eventually led to the company’s collapse. Maria’s family routinely bailed the family out during their early years, yet their troubles were not merely financial but physical as well.

In 1826, the young Melville caught scarlet fever, leaving him with permanently weakened eyesight. Despite this impairment, he attended high school. Upon moving to upstate New York in 1830, Herman became a student at the Albany Academy. Two years later, Melville’s father died, and the family’s pocketbook took another hit.

After this tragedy, Melville’s eldest brother, Gansevoort, took over their father’s business, and Melville took a job as a bank clerk. Despite unstable finances, Melville continued his studies at Albany Classical School. It was here that his passion for literature grew. Soon, he was writing both poetry and prose and even became a participant in a debating society. It was during this time that his family changed their last name from Melvill to the now-famous Melville.

In 1837, he moved to his uncle’s town of Pittsfield, Massachusetts. He took a teaching job but rapidly quit after three months when he discovered he would be unhappy in that line of work.

Once he moved back to Albany, he found his family’s estate sinking yet again. Ganservoort’s business had failed, and the family moved to Lansingburgh, New York. Here, Melville tried for a surveyor’s position on the Erie Canal project, but it fell through.

In June 1839, Melville signed up to be a cabin boy on a merchant ship called St. Lawrence. Upon his return three months later, his family’s finances had not recovered. Then in 1841, Melville boarded the Acushnet, a whaler ship heading to the South Seas. In June the following year, the whaler docked in the Marquesas Islands, and Melville jumped ship with a crewmate. Melville recorded their adventures in his first novel, Typee (1846).

His second novel, Omoo, was loosely based on his experiences living on an island and his time spent in a Tahitian jail, which he easily escaped. When Melville returned home from his adventures, he found his family more financially stable than before. His brother had received a prestigious government appointment as secretary to the United States legation in London, England.

In 1847, the year that Omoo was released, Gansevoort passed away from a brain disease. Melville became the head of his family and continued developing his craft. In August of that year, he married Elizabeth Shaw, the daughter of the chief justice of Massachusetts.

In 1847, the year that Omoo was released, Gansevoort passed away from a brain disease. Melville became the head of his family and continued developing his craft. In August of that year, he married Elizabeth Shaw, the daughter of the chief justice of Massachusetts.

He published his third book, Mardi, in 1849. However, it did not receive great reviews. Inspired to produce better content after this small failure, a few months later Melville wrote, Redburn and published his fifth book, White-Jacket, the following year.

Upon reading Nathaniel Hawthorne’s monumental novel, The Scarlet Letter, Melville received a newfound inspiration for writing and pondered the beginnings of a revitalized writing style. He moved back to Pittsfield and purchased a farm near Hawthorne’s home. The two soon became great friends. Of their relationship, biographer Laurie Robertson-Lorant remarks: “Though the two writers were drawn together in an undeniable sympathy of soul and intellect, the friendship meant something different to each of them, with Hawthorne offering Melville the kind of intellectual stimulation he needed.”

Melville’s literary ambition was on full display within his magnum opus, Moby-Dick (1951). The book was published in the UK as The Whale and called Moby-Dick in the US one month later.

It was in this novel where Melville moved away from his usual style into uncharted waters. Even though we view Moby-Dick as one of the greatest works of American literature, the book was too revolutionary for its time. This is what the literary critic Henry Chorley said of the book: “This is an ill-compounded mixture of romance and matter-of-fact.” Regarding Melville’s new style, Chorley stated, “The style of his tale is in places disfigured by mad English.”

Melville would sadly never witness the acclaim Moby-Dick would receive in later years.

At the age of thirty-three, Melville’s career was in shambles. His 1952 novel, Pierre, was a failure. Furthermore, Melville’s publishing house burned down, and with it several copies of his stories. Yet Melville persevered.

His perpetual state of poverty moved him to despise the materialism embraced by the society around him. This theme inspired his features for Putnam’s Monthly Magazine. Pieces such as The Encantadas and Bartleby the Scrivener reflected such deeply rooted sentiments.

Melville’s final novel was The Confidence-Man, published in 1857. After continuously shabby sale statistics, Melville decided to put novel writing away for good. He continued writing poetry on the side as he took a stable job as a US Customs Inspector for his remaining years.

Melville spent subsequent years in poor health but continued writing verses on the weekends. One of his most noteworthy poems, Clarel (1876), is notable for its extravagant length approximating 18,000 lines. This number was higher than such classics as Paradise Lost and The Iliad.

While making a return to novel writing, Melville died of cardiac dilation on September 28, 1891.

Later in 1919, at the centennial of Melville’s birth, a revival of his work was lit aflame. During this period, Melville quickly gained the recognition he deserved as one of the greatest writers of all time. Melville’s influence extends through the entire twentieth century to our present day, influencing postmodern greats, such as David Foster Wallace and Thomas Pynchon.