MAIN MENU
Fyodor Dostoevsky Literature
A quintessential Russian writer of the 19th century, Fyodor Dostoevsky’s  (1821–1881) works explored the relation of the human psyche with social, spiritual and political forces of his time. 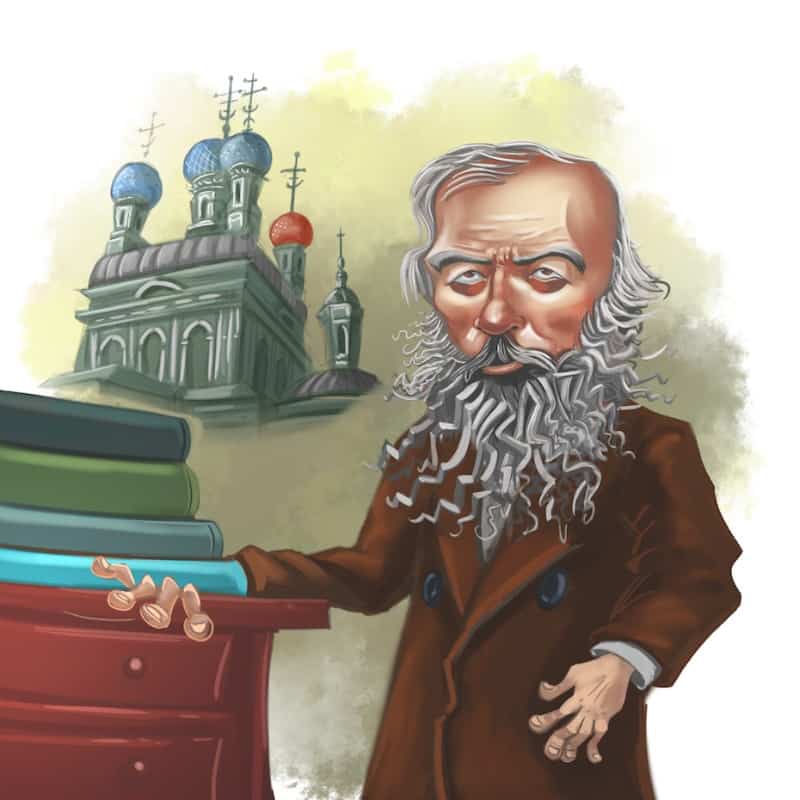 Dostoevsky was born in Moscow on October 30th, 1821. He was very close to his older brother, as they were educated at home together early in their lives. They had five younger siblings. Their father, a former army doctor, worked at Mariinsky Hospital during their youth, and they lived on the same property very near the insane asylum, orphanage, and criminal cemetery. Though Dostoevsky was forbidden to talk to the patients, he often did, creating a foundation for his later philosophies. When Dostoevsky was nine, he had his first epileptic seizure, which also helped him form philosophical theories.

Dostoevsky’s family was middle class, but his father was a tyrant. Thought to have died of apoplexy, there are rumors that his serfs murdered him. Dostoevsky’s mother was pious and mild, but passed away when he was a young teenager in 1837. Soon after, he enrolled in the Army Engineering College in St. Petersburg. In 1842, he was promoted to lieutenant—a position his father wanted for him, but in 1844, he resigned from his post as a military engineer to devote his time to writing.

In 1846, Dostoevsky’s first novel Poor Folk was published. He joined utopian socialists, mostly young intellects, who discussed literature and politics. They were called the Petrashevsky Circle, led by Mikhail Petrashevsky. In an attempt to support the expression of free thought, illegal in reactionary mid-nineteenth-century Russia, they were arrested in 1849 and sentenced to death. Called a mock execution, a firing squad lined up but were stopped by the changing of the sentence to four years of exile and labor in Siberia.

While in prison, Dostoevsky devoted his time to philosophy and gained an intimate understanding of the Russia lower class and criminal mindsets. He grew spiritually because the Old Testament was the only reading allowed, which led him to reject his liberal views in favor of his new belief that redemption stems from suffering and faith.

Dostoevsky was freed in 1854, only to be forced into active duty for the Siberian garrison. He married Maria Isaeva, a young widow, two years after. By 1859, he was finally allowed to return to St. Petersburg, where he resumed writing. His publications from this time were religiously based, expression social and political order based on spiritual values. The House of the Dead, The Insulted and Injured and Winter Notes on Summer Impressions were all published in 1860. Dostoevsky started two periodicals, writing articles and short fictions, but were closed by authorities because one article covered the Polish uprising.

In 1864 and 1865, his wife and his brother passed away. His debts and new experiences made worse by a gambling addiction inspired more novels. Notes from the Underground (1864) and Crime and Punishment satirize society and politics, and his Underground Man, bitter and frustrated, embodied the creation of a new type of literary figure and spiritual nihilism.

In 1867, Dostoevsky was traveling around Europe to escape his debts. He married Anna Snitkina, who was twenty years old. He wrote Crime and Punishment in a hurry so he could have an advance payment from the publisher. By 1873, through 1881, he worked on the series Writer’s Diary. He had a lung hemorrhage in 1881 and passed away on February 9.