MAIN MENU
Friedrich Nietzsche Philosophy
German philosopher of the late 19th century, Friedrich Nietzsche (1844–1900) boldly and daringly challenged the foundations of Christianity, traditional morality, and other prevalent social mores. He was at the forefront of the existentialism, perspectivism, and nihilism movements that emphasized the importance of human individuality and freedom; discovery of truth only in the context of our own perceptions… 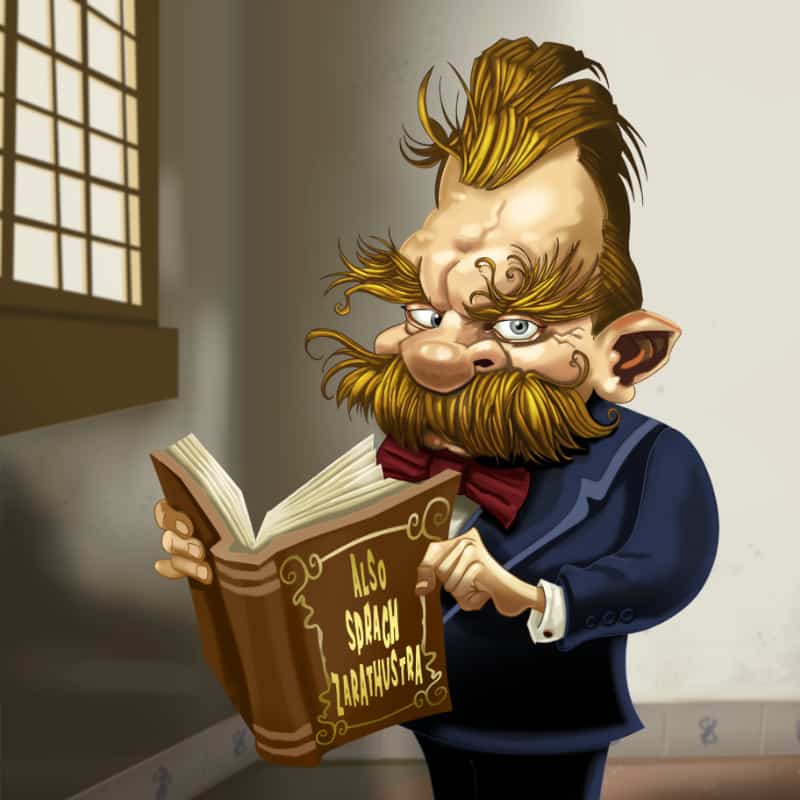 German philosopher and writer, one of the most influential thinkers of the 19th century.

If there is a paradox to be gleaned from Nietzsche’s life, it is that this son of a Lutheran minister, who intended to become a clergyman himself, ended up challenging the foundations of Christianity. He saw religion as “slave morality,” hindering the free flow of ideas and preventing people from being masters of their own fate.

Perhaps because it covers such diverse and often controversial subjects as morality, religion, and social criticism, Nietzsche’s philosophy has sparked passionate reactions—both praise and criticism.

His ideas, as reflected in Nietzsche’s prolific writings, cannot be neatly arranged coherently and consistently. As he wrote in his autobiographical “Ecce Homo,” (1888), his philosophy evolved, so concepts he developed in earlier books were not necessarily present in later ones.

This lack of systematic and cohesive thought – one of the reasons his doctrines are at times difficult to interpret – is perhaps best expressed in his assertion that “There are no eternal facts, as there are no absolute truths.”

Some ideas that emerge from his books include perspectivism, a belief that truth could only be known in the context of our own perceptions and interpretations, as well as the concept of “life-affirmation,” which challenges all ideas—no matter how prevalent – that drain life’s energies. Also, he argued that humans are more driven to accomplishment of their goals by “the will to power” than by a desire to experience pleasure or avoid pain.

THE BIRTH OF IDEAS

Born in Röcken, the Prussian province of Saxon, Nietzsche excelled in religious studies at a preparatory school. Even though in his 1862 essay “Fate and History,” he expressed his doubts about the Christian doctrine, he started to study theology at the University of Bonn, but eventually abandoned this field, focusing on classical philology instead.

At only 24, he was offered the chair of the classical philology department at the University of Basel, Switzerland. His decade teaching there was interrupted by military service during the Franco-Prussian War (July 1870 – May 1871) and various health issues, including chronic migraine headaches, as well as dysentery, diphtheria, and possibly syphilis—all of which he reportedly contracted while serving as a medical orderly on the front.

Although his health problems forced him to retire from the University at 35, Nietzsche’s time in Basel was far from idle. Not only had he published his first book, “The Birth of Tragedy,” but he also became a close friend of composer Richard Wagner (whom he previously met in Leipzig and greatly admired). Nietzsche eventually became estranged from Wagner; one of the reasons was the composer’s ardent German nationalism and avowed anti-Semitism, both of which Nietzsche abhorred. (It is perhaps ironic that, after his death, Nietzsche’s sister Elisabeth, who was married to a prominent leader of an anti-Semitic movement, encouraged the association of her brother’s philosophy with the Nazi ideology).

Having given up his Prussian citizenship in 1869, Nietzsche remained stateless for the rest of his life, which did not prevent him from traveling throughout Europe and becoming somewhat of a nomad. This period proved to be productive; between 1872 and 1888, he published nine books and worked on four others.

The books published during this time, which turned out to be the last decade of his short life, provide insight into his philosophy. For example, “Gay Science ((1882) and later “Thus Spoke Zarathustra” (1883–85), contain one of Nietzsche’s most famous remarks: “God is dead.” These words should not be taken literally or in a purely theological context. They are meant to convey Nietzsche’s belief that the Judeo-Christian God is not a source of moral values. Even more symbolically, the “death of God” announces the advent of nihilism—the rejection of all religious and moral principles and the belief that life is senseless and meaningless.

Also in “Thus Spoke Zarathustra,” Nietzsche developed the concept of “Ubermensch,” a superior being and creator of new values, who can face and overcome adversities in the real world, rather than in the “life beyond,” as preached by Judeo-Christian principles.

On January 3, 1889, Nietzsche suffered a mental breakdown, reportedly after witnessing the beating of a horse. He spent the last 11 years of his life living first with his mother and then with his sister as his health continued to deteriorate. He died in Weimar, Germany, after suffering a stroke in August 1900 at only 45 years of age.

Despite the controversy surrounding Nietzsche’s philosophy during his lifetime, his influence remains substantial among writers, philosophers, and scientists of the modern era—Thomas Mann, Herman Hesse, Albert Camus, Rainer Maria Rilke, Sigmund Freud, and Jean-Paul Sartre, among them.