MAIN MENU
Franz Liszt Music
One of the most singularly talented pianists of all time, Franz Liszt (1811–1886) dominated the musical world of the 19th century. An unrivaled virtuoso who also composed his own music, Liszt laid the bedrock for the Late Romantic and Impressionistic schools that would follow after him. To this day he is considered a musical genius… 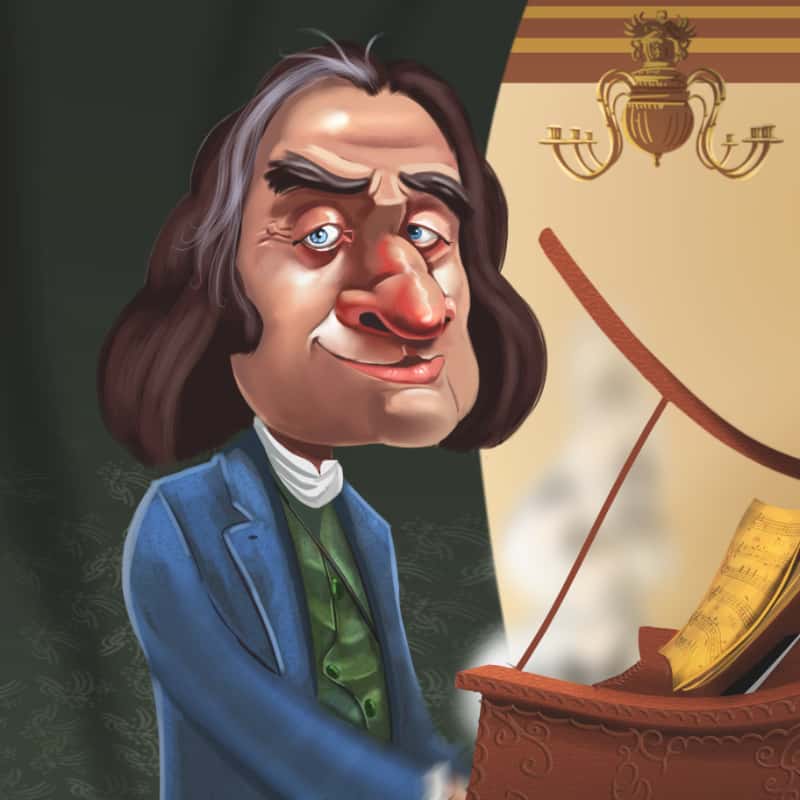 Liszt was born in the small village of Doborján, Hungary, in what was then called the Austrian Empire. His parents were Ádám and Anna Liszt, the former being the steward of the village. By all accounts, Liszt had a good relationship with his parents and a relatively happy childhood.

His incredible talent for the piano became apparent at an incredibly early age. He began taking lessons from his father at the age of six and displayed such incredible talent that a group of wealthy patrons decided to sponsor his education. The Liszts traveled to Vienna, where Franz made his public debut at a concert in 1811- at the age of 11. While studying in Vienna, Franz received lessons from Carl Czerny and Antonio Salieri, and is reported to have received praise from Beethoven himself.

In 1823, Liszt decided to journey to Paris, where he attended a concert by the virtuoso violinist Paganini. Liszt was captivated by the violin and became motivated to become the greatest pianist in the world. He was said to have practiced ten hours a day, and it was during this time that he began to start composing his own music. His first composition, Variation on a Waltz by Diabelli, was published in 1824.

Utterly determined to perfect his skills as a pianist, Liszt began touring Europe and putting on concerts in Weimar, where he lived. Not only did Liszt spread the popularity of his own music, but he also championed the works of Berlioz and Wagner.

Liszt was a popular musician and got on well with many other famous artists of the day, including Richard Wagner and Frederic Chopin. Although Liszt and Chopin started as friends, they eventually became rivals and bitter enemies. Whereas Chopin was a shy, reclusive genius, Liszt was an outgoing public figure and one of the world’s earliest major celebrities.

In addition to being a genuinely talented musician, Liszt was a master of the public performance. “Lisztomania” was only beginning to take hold during the 1830’s and early 1840’s, but even then Liszt was considered a cultural icon. Young, handsome, and extremely intelligent, he captivated audiences and had more than a few love affairs. In the late 1830’s he lived with Marie Catherine Sophie de Flavigny, with whom he had two daughters and a son. His most prominent affair, however, was with the Polish Princess Carolyne zu Sayn-Wittgenstein, with whom he lived until his death. The two were unable to marry by Vatican law as the princess had never obtained a divorce from her previous marriage—a fact that crushed Liszt.

Liszt’s international fame endured into the 1860’s, at which point the deaths of his son and daughter led him to retire in Rome. He joined the Franciscan order in 1857 and took to a monastic lifestyle in which his musical pursuits were focused almost entirely on church music. During the 1860’s and 70’s, he divided his time between Rome, Weimar, and Budapest, where he taught masterclasses to students.

In 1886, Liszt died of pneumonia at the age of 74. He was buried in Bayreuth, Germany, and was succeeded by his daughter Cosima.