MAIN MENU
Architecture Frank Lloyd Wright
Widely hailed as the greatest American architect of all time, Frank Lloyd Wright (1867 – 1959) designed hundreds of iconic buildings and structures throughout the early 20th-century. Well-known for his creative and visionary designs, Wright believed that America should break away from traditional European architectural designs, and helped to establish a uniquely American style of… 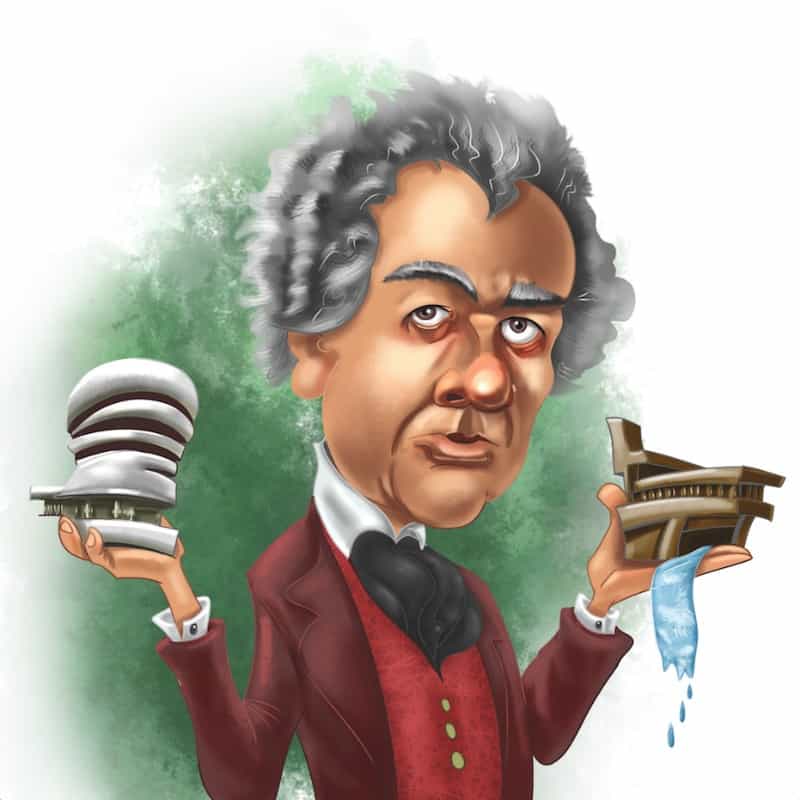 Born to a school teacher and a formerly widowed pastor, Frank Lloyd Wright’s early childhood was filled with travel as his family moved from state to state before finally settling in Wisconsin. Wright fell in love with the Midwestern landscape, and it was while working on his uncle’s farm that he began to discover his dream of being an architect. Wright’s parents divorced in 1885, and his father left the family; that same year, Wright left high school early to enroll as a special student at the University of Wisconsin. There he studied civil engineering for two semesters before moving to Chicago.

Upon his arrival in Chicago, Wright began an apprenticeship under the architect Louis Sullivan, well-known as the “father of skyscrapers.” It was Sullivan who first started Wright on the path to establishing a uniquely American architectural sense; he eschewed European tradition in favor of functionality, stating the maxim of “Form Follows Function.” Wright would later adapt this into his own “Form and Function Are One.” Wright and Sullivan would eventually part ways when Sullivan discovered that Wright had breached their contract by accepting private commissions, but Wright would continue to cite Sullivan as a significant influence on his work even years later, referring to him as “lieber meister” (rather masterful). In 1889, he married Catherine Tobin, with whom he would have six children.

Wright struck out on his own, opening his office in 1893 in Chicago before moving to Oak Park five years later. He began to design his early houses, displaying a pragmatic talent for designing uniquely simple and functional houses that followed a “horizontal” design: no basements, no attics. These early designs, called, “organic architecture,” became the precursors to what would later be known as the Prairie School, which adapted to the Midwestern landscape by featuring wide, airy rooms that were open to each other. His notable creations during this period include the Winslow House in River Forest and the Martin House in Buffalo, New York. Ironically, while Wright was attempting to establish a predominantly American architectural identity, it was in Europe that his work was most popular while he remained relatively unknown in America.

Never one to remain sedentary, and perhaps following in his own father’s footsteps, Wright suddenly abandoned his wife and children in 1909 and ran away to Germany with a woman named Mamah Borthwick Cheney. The two remained in Germany for four years, during which Wright continued to build both his portfolio and his international fame, before returning to America. Wright’s mother had left him a portion of their ancestors’ land in Wisconsin, and Wright decided to build a house where he and Cheney could live. This house, dubbed “Taliesin” (Welsh for “shining brow”), was one of Wright’s greatest works to date. Unfortunately, however, a life-changing tragedy lurked just around the corner.

Taliesin was both a home and a studio for Wright: in addition to Mamah and her two children John and Martha, the house was populated by a six-man work crew as well as two servants: Julian and Gertrude Carlton. Julian and Gertrude were a married couple from Barbados, who served as a handyman and maid, respectively. The causes of the massacre that occurred on August 15th, 1914 have been dissected and examined by experts throughout history- some sources claim that Julian frequently clashed with

Mamah, while others state he felt that the house’s residents were “picking on him.” This is all speculation, however; to this day, no solid motive for the motives has ever been revealed.

What is known is that on August 15th, while Wright was visiting Chicago to work on a project, Julian Carlton went insane. He set fire to Taliesin and brutally murdered Mamah and her children with a hatchet; only two of the work crew survived, along with Gertrude and Julian himself, who was found hiding in the unlit furnace. Gertrude denied any knowledge of her husband’s actions, and Julian eventually starved to death in prison six weeks later.

Wright was understandably devastated by the loss of his family, home and employees, but he resolved to “wipe the scar from the hill” and rebuild Taliesin. Unfortunately, the house’s second incarnation was no less unlucky than its first: it burned down again in 1925, this time, of an accidental fire, possibly caused by a lightning strike. Wright, undaunted, rebuilt it yet again, and Taliesin III would serve as his home for the rest of his life.

Where the Taliesin tragedy might have ruined anyone else’s life permanently, Wright’s career continued long after the horrific events of that day. He remarried two more times and continued to accept building commissions; his most famous work was the Imperial Hotel in Tokyo, the construction of which took six years. Wright claimed the building’s design was “earthquake-proof,” and was soon proven correct: following the Kanto Earthquake of 1923, the Hotel was the only building left standing.

The 1930’s saw the beginning of the Great Depression and commissions for Wright’s work dwindled. Always one to roll with the punches, Wright put his architecture on hold and turned to teaching and lecturing, establishing the Taliesin Fellowship in Spring Green, Wisconsin in 1932. Surprisingly, it was during this stagnant period that Wright completed some of his more famous works, including Fallingwater and the Johnson Wax building.

With his fame on the rise again, Wright began to accept more commissions, up until his final work, the Guggenheim Museum. While working on the Museum, Wright underwent surgery for an intestinal blockage but died suddenly five days later. He was buried in the cemetery at Taliesin, not far from both his mother and Mamah Cheney.