MAIN MENU
Alfred Hitchcock Film
The undisputed “master of suspense,” Alfred Hitchcock (1899–1980) was an iconic film director and producer of over 50 movies, including Dial M for Murder, Vertigo, North by Northwest, Psycho, and The Birds. The techniques he pioneered inspired a new generation of filmmakers and revolutionized the “thriller” genre. 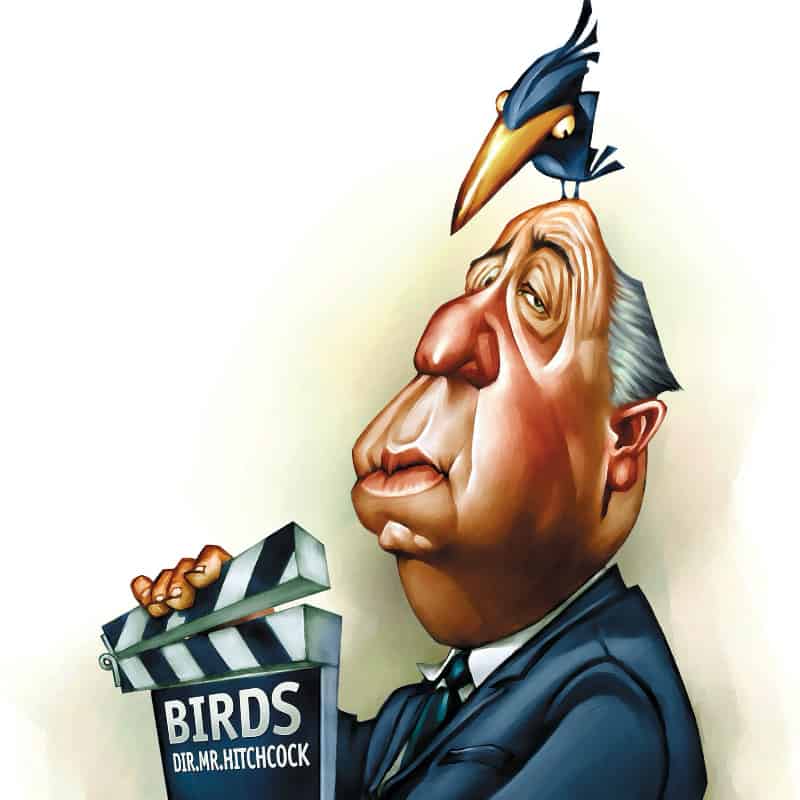 From Dial M for Murder and Vertigo to North by Northwest, Psycho, and The Birds, Alfred Hitchcock made some of the most memorable thrillers in the history of cinema. Acclaimed for both his daring artistic innovations and his irrepressible showmanship, Hitchcock blended suspense, humor, and psychologically unsettling themes to create an extraordinary body of work.

Hitchcock was born in London, the middle child of a Catholic grocer. He told a number of stories about his upbringing, characterizing it as solitary despite his siblings, overseen by his sternly formal parents. Aspects of his mother were borrowed for his popular movie Psycho, including her insistence on his formal address to her from the foot of her bed and her making him stand silently for hours as punishment. At least once, his father had him locked briefly in a jail cell as punishment. It’s not that his parents were necessarily cruel, especially by the standards of the turn of the century England—but their stoic discipline only enhanced young Hitchcock’s feelings of isolation. This early exposure to strict authority—to unfair punishment and feelings of guilt—led to his lifelong fear of the police, and, in turn, is probably responsible for the majority of his films dealing with crime in one way or another. It is possible that he took the blame for the actions of his siblings, too, or, at least, felt that he did. One of the strongest recurring themes in his work is that of an innocent person suffering the consequences of another individual’s crimes.

As a young man, Hitchcock worked in advertising before becoming interested in film, applying his experience in graphic design for a job creating the title sequences for silent movies. He worked in similar roles in the burgeoning film industry for five years before directing The Pleasure Garden in 1925. Filmed in Germany, home to many of Hitchcock’s visual influences, the melodrama of madness and murder centers around betrayal and adultery, setting the stage for his reputation as a director of particularly “sexualized” films. In the following years, Hitchcock continued to develop as a filmmaker and grew in reputation. At the increased pace of the silent era, which produced significantly shorter movies than is done today, with fewer retakes and locations, he directed a dozen movies by the end of the decade. Among them was Blackmail, the first full-fledged “talkie” of the British pictures.

Hitchcock had less trouble adapting to new technology than most directors, and seems to have had little difficulty moving to longer formats and telling more detailed or layered stories. His star Anny Ondra did not fare as well—her thick Eastern European accent contrasted for English-speaking audiences with her classic, glamorous good looks, and her career did not extend much further than Blackmail. Hitchcock released both a voiced and a silent version of Blackmail simultaneously, and Anny’s accent may have been responsible for the silent version proving the most popular of the two. The lion’s share of the responsibility for that success, however, lies in the fact that most British movie houses—especially outside of London—were not yet equipped for sound.

The 1930s were a fertile period for Hitchcock and saw the release of his best-known and best-remembered movie from his pre-Hollywood time: The 39 Steps, based on the John Buchan novel was the movie that introduced the film concept most associated with Hitchcock. The “MacGuffin,” a plot device that drives the story but is essentially unimportant to it in its specifics. The best non-Hitchcock example of a MacGuffin is The Maltese Falcon in the novel and movie of the same name: the fact that the statue is a falcon—or even that it is a statue—is entirely irrelevant, and all that matters is that there is a prized object over which many characters are fighting. A more recent and sly example is the briefcase in Pulp Fiction, the contents of which are never even revealed. A MacGuffin provides motivation, but all that matters is that the characters want to obtain it, which automatically builds conflict as multiple characters cannot all have it.

It was also during this period that Hitchcock became known for his disparaging remarks about actors—like many directors with a strong vision, he seems to have had little patience with performers who wanted any input beyond following his instructions, and only contempt for actors who felt a role was beneath them (as was often the case with theatrical actors working in cinema). He had a noted dislike for method acting, believing that actors should focus only on the role at hand and leave characterization to the writers and director. In response to a question from a fan about whether he actually once said that “actors are cattle,” Hitchcock replied: “No, what I really said was that actors should be treated like cattle.” Hitchcock himself made a cameo appearance in each of his films—often only briefly, especially in the last half of his career when he was famous enough that the general public knew him on sight.

The end of the 1930s saw the maturation of the Hollywood movie, as sound better film stock, and more sophisticated plots combined into some of the best-loved films of the Golden Age—including the original King Kong, A Star Is Born, and Gone With The Wind, all of which were produced by David O. Selznick. Selznick convinced Hitchcock to relocate to Hollywood, by now well-established as the center of the popular movie industry. Hitch’s first American movie—set in England and based on the English novel by Daphne du Maurier—was the 1940s thriller Rebecca, starring Laurence Olivier and Joan Fontaine, major movie stars whose sophistication suited a British director’s first Hollywood venture.

Hitchcock did not enjoy working according to Selznick’s specifications, and he seems to have lost some of his focus in the 1940s, moving away from his usual areas of focus to direct a courtroom thriller and a romantic comedy, as well as a documentary for the British Army about the Nazi concentration camps. But the decade also saw him direct his favorite movie Shadow of a Doubt, which was one of his movies influenced by his interest in psychoanalysis (the less successful Spellbound that followed was an explicitly Freudian work, which quickly became dated but is notable for its dream sequence created by surrealist artist Salvador Dali).  It revolves around a young woman’s suspicions that her uncle may be a serial killer. As intriguing as the movie is on a purely plot-driven level, there are a good many elements that have fascinated film theorists, from the fact that the young woman and her uncle have the same name to the serial killer’s targeting of widows—women already defined by death. Shortly after Spellbound, Hitchcock was investigated by the FBI, because his new movie, Notorious, used uranium as its MacGuffin—a substance the public had little reason to be aware of since the development of nuclear weapons had not yet been revealed when the movie was in production. Notorious was also Hitch’s first film with Cary Grant, who would star in several more of his films.

But if any one star is associated with Hitchcock’s movies, it is Jimmy Stewart, whose first collaboration with the director was 1948’s Rope, a psychological thriller based on the Leopold and Loeb murders. Rope was shot with long, unbroken shots, around seven to nine minutes long, with minimal editing. The whole movie takes place on one set, a penthouse apartment where two young men are hosting a dinner, thrilled at the fact that none of the guests suspect they have killed a mutual friend whose body is concealed in the coffee table. Stewart plays the young men’s philosophy professor, who exposed them to the Nietzschean ideas that inspired them to take a life—and in the end, he is the one who exposes them as well. Rope was also Hitch’s first color film, and the use of the heavy Technicolor cameras not only made the long shots more complicated to set up, but made the effect that much more impressive—the lack of the cuts the audience is used to. The insistence of the camera on following its subject around adds to the feeling of tension in much the same way as a musical score does, but more subtly.

More Stewart-Hitchcock collaborations followed, including a remake of Hitchcock’s own The Man Who Knew Too Much, the paranoid voyeur drama Rear Window, and the classic Vertigo, which tied madness, mistaken identity, obsession, and paranoia together in one of the most “Hitchcockian” movies extant. The 1950s saw Hitchcock take more control of his work as he directed pictures for an assortment of studios. In addition to the Stewart pictures, he made To Catch a Thief with Grant and Grace Kelly; Kelly also starred in Rear Window and in the experimental Dial M For Murder, which was filmed in 3D (though it was not released in that format until a brief run in the 1980s).

Without a doubt, his most famous movie is Psycho, the 1960s thriller starring Anthony Perkins and Janet Leigh. The influence of the film on modern cinema cannot be overstated: Hitch played with conventions by killing his apparent star early in the movie, by introducing a compelling twist ending, and by using 50 different shots (most of them close-ups) in the 2-minute shower scene in which Perkins’ Norman Bates kills Leigh’s character. Because the appeal of the movie depended so much on elements of surprise, Hitchcock did all the publicity and interviews himself, forbidding his actors from speaking to the media about the film. He even convinced theaters not to let customers in late. The movie was not only an enormous success, but it also helped to inspire and further the cinematic interest in the serial killer, the psychopath, the murderer who commits his crime for reasons that have nothing to do with revenge or criminal gain.

One reason Hitch was able to do the publicity himself for Psycho was that he was by then a well-known public figure. One of the first film directors to recognize television as more than a fad, in 1955 he had created the show “Alfred Hitchcock Presents,” an anthology series in which he introduced each suspenseful episode with his droll, dry sense of humor. So involved was he with the TV series that he actually used many of the crew members in the production of Psycho—something unheard of in those days, long before it was common for professionals to migrate back and forth between TV and film.

After the 1960s, Hitchcock became considerably less prolific, filming a handful of thrillers before unofficially retiring. He died of renal failure at the age of 80 in 1980, four months after being made a Knight of the British Empire. Hitchcock had remained a British subject even after acquiring American citizenship, leaving him eligible for knighthood. His body was cremated, and his ashes were scattered over the Pacific Ocean.