MAIN MENU
Albert Einstein Physics
His formula about the relationship of mass and energy, E=mc[2], revolutionized the world of science. Undoubtedly one of the most influential physicists of all time, Albert Einstein (1879-1955) radically transformed our understanding of the universe. Perhaps best known for his theory of relativity, his contributions to physics are varied, unique, and still very relevant. He furthered our… 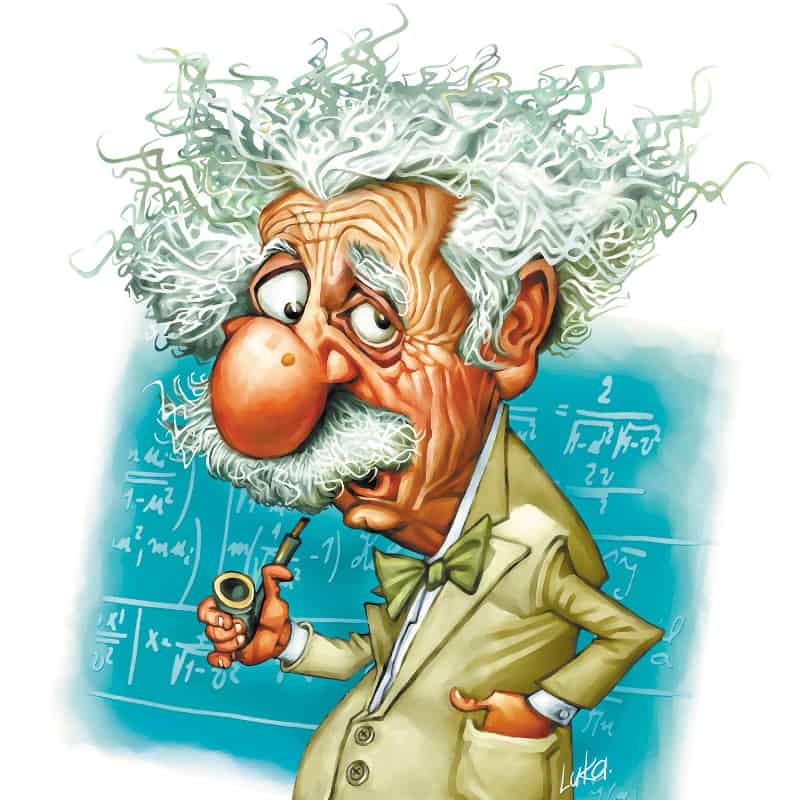 His formula about the relationship of mass and energy, E=mc2, revolutionized the world of science. Undoubtedly one of the most influential physicists of all time, Albert Einstein (1879-1955) radically transformed our understanding of the universe. Perhaps best known for his theory of relativity, his contributions to physics are varied, unique, and still very relevant. He furthered our understanding of time, space, energy and matter, and contributed to the development of quantum physics. Practically all the modern physicists and astrophysicists are drawing from Einstein’s groundbreaking work, a never-ending testimony to this quintessential scientific genius.

Born in Ulm, in Württemberg, Germany, Einstein’s birthday happens to fall on “Pi Day” (3-14) and is informally celebrated by some mathematicians.

Einstein was slow to develop in his early childhood—but it would be a mistake to think that “slow” equated to “stupid.” His father gave him a compass at the age of 5, sparking an early interest in physics that Einstein would pursue throughout his life. Popular legend claims Einstein was a poor math student, which isn’t quite true. He was a late bloomer and had poor language skills at a young age, something that is often true of highly introspective individuals. But he taught himself calculus and geometry with the aid of a school pamphlet and a copy of Euclid he received as part of a stack of books from a family friend who was studying medicine. As a student, he disliked the gymnasiums—German secondary schools—and after leaving school at 16, he failed the entrance exam for the Federal Polytechnic Institute, which may be the source of the “bad student” myth. But failing the entrance exam on the first try wasn’t that unusual. He passed it the following year in 1895, at which point he also renounced his German citizenship to avoid military service and moved to Switzerland to pursue mathematics.

Though pure mathematicians usually peak early in life, doing their most brilliant and groundbreaking work at a very young age, as a physicist Einstein’s early work only hinted at his aspirations. His first published paper dealt with capillarity—the ability of an object to draw a substance upwards despite the pull of gravity, such as plants taking water from the soil and the use of drinking straws. While studying for his teaching diploma in Zurich, Einstein met his first wife, Mileva Marić, whom he would later divorce in 1919. Unable to find a teaching position, Einstein instead took a job with the Swiss Patent Office and began studying for his Ph.D. at the University of Zurich. It was during this time that his scientific genius began to come to light.

In 1905, referred to as Einstein’s “miracle year,” he published four revolutionary papers in the Annalen der Physik scientific journal. The “Annus Mirabilis” papers, as they came to be called, dealt with the photoelectric effect, Brownian motion, the special theory of relativity, and Einstein’s theory of matter-energy equivalence—better known as “E=mc2”. Einstein’s publications shook the foundation of previously-established ideas about modern physics and inspired a new way of looking at time, space and matter. Anyone of these papers by itself would have been a scientific rainmaker, and together they read like a Greatest Hits of twentieth-century physics. The famous E=mc2 equation appeared in “Does the Inertia of a Body Depend Upon Its Energy Content?” His paper on Brownian motion supported the existence of atoms, which at the time was still a contested theory. His photoelectric effect paper would influence the entire field of quantum mechanics—which Einstein himself was uncomfortable with—and accordingly earned him a Nobel prize. Most famously, “On the Electrodynamics of Moving Bodies” proposed Einstein’s theory of special relativity. Special relativity contradicted the widely accepted physics of Isaac Newton, in order to reconcile certain observed facts about bodies in motion.

To understand the impact special relativity had, consider the beliefs it did away with. In Einstein’s time, the dominant view of the universe, developed in the previous two generations, was that of “luminiferous aether.” This aether filled space, beyond the atmosphere of the earth and other planets, and was the medium through which light traveled. Because light was known to travel in waves, scientists couldn’t conceive of it doing so without some medium to travel through—it was like imagining the waves of the ocean without water. Aether was constantly redefined in order to keep from contradicting other theories, and finally, Einstein pointed out what should have been obvious: that if you assumed aether didn’t exist, you could come up with a new theory that didn’t have such contradictions. Doing so required changing the very model of the universe itself.

In 1914, Einstein returned to Germany after accepting a position as director of the Kaiser Wilhelm Institute for Physics. During the first World War, he worked on his more radical theory of general relativity. While special relativity had undone the aether, general relativity contradicted Newton’s model of gravity, one of the most basic and seemingly intuitive concepts in physics. Einsteinian gravity is an effect of curving spacetime, a harder concept to illustrate than an apple falling from a tree. The impact of Einstein’s theories was delayed, despite the fame, he had attained from the Annus mirabilis papers; the war made it difficult to disseminate scientific papers. But in 1919, astronomical experiments conducted during the solar eclipse confirmed what general relativity predicted about the bending of light—while Newtonian models were shown to be in error.

Though the general public didn’t seem to understand immediately what the big deal was, the effect in the scientific community was tremendous. Einstein’s discovery launched him to international fame almost overnight, with the New York Times headline two days later reading: “Lights All Askew In The Heavens/Men Of Science More Or Less Agog Over Results Of Eclipse Observations/Einstein Theory Triumphs.” The name “Einstein” became synonymous with “genius,” a tribute that continues to this day.

In 1933, Einstein saw the rise of the Nazi party as a threat to his life. When Hitler rose to power, Einstein was traveling abroad in California. He elected not to return to Germany and instead remained in the United States and became a professor at Princeton University. Many other Jewish scientists fled to the United States as well, including Einstein’s colleague Leó Szilárd.

Szilárd, an Austrian-Hungarian physicist who conceived the nuclear chain reaction, was fearful of the possibility that the Nazis might develop a nuclear weapon. He convinced Einstein to help him draft a letter to President Roosevelt warning him of the threat of Nazi nuclear weapons; despite Einstein’s lifelong pacifism, he agreed that the Nazis could not be allowed to control this power alone. The Einstein- Szilárd Letter convinced President Roosevelt to begin research on nuclear weapons in what would come to be called the Manhattan Project. Contrary to popular belief, Einstein did not directly contribute to the Manhattan Project himself, but the Einstein- Szilárd Letter was instrumental in getting it started.

Following the American bombing of Hiroshima and Nagasaki, Einstein regretted drafting the letter, stating a year before his death that “I made one great mistake in my life … when I signed the letter to President Roosevelt recommending that atom bombs be made; but there was some justification – the danger that the Germans would make them.” Perhaps out of a sense of atonement, Einstein spent his later years championing peace and tolerance. He was a member of the NAACP and referred to racism as “America’s worst disease,” and received the One World Award in 1948. Einstein was a strong advocate for a unified world government, stating that nationalism was “an infantile disease. It is the measles of mankind.”

Einstein became an American citizen just before the start of World War II, and was later offered the position of President of Israel, which he declined. In his scientific research, Einstein’s later work revolved around the search for a “unified field theory.” The search for such a theory, a single theory that would describe all the physical laws governing the universe, had begun in the nineteenth century, and every revolution in physics rewrote those laws and thus the theory’s demands. His approach centered around the treatment of curving spacetime and became increasingly abstract. It has been suggested that in refusing to incorporate quantum mechanics into his views, he may have found himself coming up with the same sort of convoluted explanations of the universe as the atheists had.

In 1955, at the age of 76, Einstein suffered an aortic aneurysm while at Princeton. He refused surgery, stating: “I want to go when I want to go. It is tasteless to prolong life artificially. I have done my share; it is time to go. I will do it elegantly.” He passed away the next morning, and during the autopsy, his brain was removed by Dr. Thomas Harvey, who wanted to study what made Einstein a genius. Harvey, who did not have any permission to do so, was summarily dismissed from the hospital. Einstein’s brain is currently kept at the Mutter Museum in Philadelphia.

Einstein’s legacy, a marriage of science and philosophy, continues to endure to this day. From X-Rays to microwave ovens, many modern technological appliances make use of Einstein’s studies of physics. His pioneering work in physics shaped how scientists look at matter today and his views on peace and pacifism join the ranks of Gandhi, whom he greatly admired and corresponded with. The iconic image of Einstein as the wild-haired mad professor endures in the public eye, and to this day, his name means “brilliance” even to those who know nothing of him.