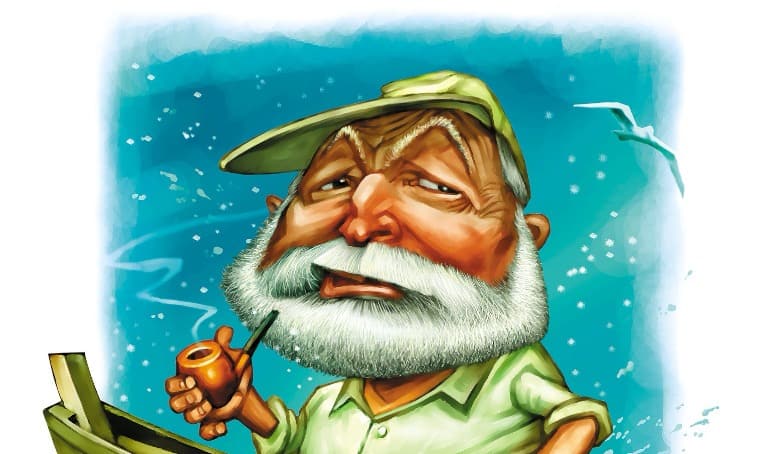 1.Ernest Miller Hemingway was born on July 21, 1899, in Oak Park, IL, a middle-class suburb just outside of Chicago, which Hemingway with great contempt described as a town of “wide yards and narrow minds.” Oak Park, however, has fondly erected a Hemingway Museum in honor of their famous former resident, and also holds a yearly Hemingway Festival, complete with a playful “running of the bulls” event.

2. Hemingway’s first novel, The Sun Also Rises, published in 1926, was inspired by a quote from Ecclesiastes 1:5: “The sun also ariseth, and the sun goeth down and hasteneth to his place where he arose. And that which is done, is that which shall be done, and there is no new thing made under the Sun.” Despite its deep meaning, The Sun Also Rises was published in 1927 in England, Germany, and Spain under the title Hemingway had originally intended for the novel, “Fiesta.”

3. In 1918, after losing his job as a reporter, a young Hemingway, hoping to support the World War I efforts, attempted to enlist in the United States Army, but was rejected on account of poor eyesight. Instead, he joined the Red Cross Ambulance Corps and was stationed in Italy. His affair with American Red Cross nurse Agnes von Kurowsky is widely known and immortalized in a semi-autobiographical account in “A Farewell to Arms.”

4. Hemingway became a member of the “Lost Generation”—a group of American writers who lived in Europe after WWI—by way of mentor Gertrude Stein, who took Ernest under her wing while he was covering the Greco-Turkish War in Paris (and stirring up trouble with fellow writers Sherwood Anderson and Ezra Pound). During his exploits in Paris, well-chronicled in A Moveable Feast, Hemingway’s first son, Jack, was born, and he asked Stein to be the child’s godmother.

5. The prominent scar on Ernest’s forehead is said to have been inflicted in Paris when a drunken Hemingway mistakenly pulled a skylight down over his head while trying to flush a toilet.

6. Hemingway married his second wife, Pauline Pfeiffer, merely weeks after divorcing his first, Hadley Richardson, in 1927. (As Pauline was a devout Catholic, Hemingway converted when they married.) They would have two sons together, Patrick and Gregory; her difficult labor with Patrick inspired A Farewell to Arms heroine Catherine Barkley’s death during childbirth.

7. Hemingway’s novella The Old Man and the Sea, (1952) earned him a Pulitzer Prize in 1953. The following year he was awarded the Nobel Prize for Literature. In response to the award, Hemingway stated he would have been “happier … if the prize had been given to that beautiful writer Isak Dinesen.”

8. An avid adventurer, Hemingway was involved in two successive plane crashes in Africa during the mid-1950s. Newspapers actually published obituaries of the writer who had, in fact, suffered severe, lasting injuries.

9. Hemingway died of a self-inflicted gunshot wound on July 2, 1961. He would be one of five suicides in his family, including his father, brother, sister, and granddaughter, model/actress Margaux, in 1996, who was buried in the family plot with her grandfather in Ketchum, Idaho.

10. The International Imitation Hemingway Competition is a yearly contest devoted to acknowledging the best “Bad Hemingway” one-pagers. The rules, according to the contest description, “are that the writing sample must be no longer than one page, it must mention Harry’s Bar & American Grill (Hemingway’s favorite Italian watering hole), and it must sound and read like Hemingway while being side-achingly funny.”