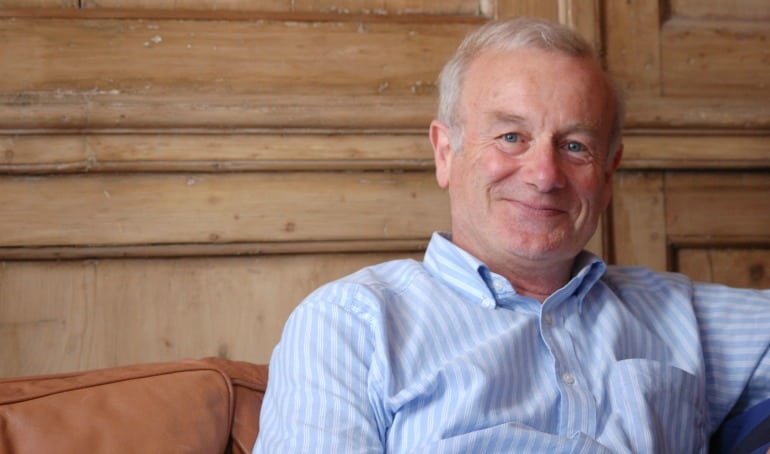 English theoretical physicist Paul Dirac (1902–1984) was a mathematician who was instrumental in the development of both quantum mechanics and quantum electrodynamics. In 1933, he shared the Nobel Prize in Physics with Austrian physicist Erwin Schrödinger.

A particle physicist, author, and speaker, Frank Close is Professor of Physics at the University of Oxford and a Fellow of Exeter College in Oxford. He is the winner of the Kelvin Medal for the public understanding of physics and the author of ten books, including Neutrino and Antimatter.

Simply Charly: Paul Dirac is best remembered for his work with quantum mechanics. Can you briefly summarize Dirac’s discoveries and the impact they had on the scientific community?

Frank Close: His most famous is his prediction of the positron—the antiparticle of the electron. This arose from his combining the theory of special relativity and quantum mechanics. He also made a relativistic quantum theory of the electromagnetic field, and its interactions with matter, known as quantum electrodynamics. This can, in some cases, describe properties of matter, such as the magnetic moment of the electron, to accuracies of a part in a billion. In medicine, positrons are used in PET scanners.

FC: To answer that requires registering for an advanced quantum course!

But generally, the matrix formulation was shown to be equivalent to Schrödinger’s, and as the latter is easier to solve, that is what students learn today. Matrix mechanics tends to occur in more advanced courses.  Schrödinger’s approach introduces a wavefunction, “psi;” interpreting what psi actually means is where the “mysteries” of quantum theory arise, but solving the differential equations is possible with rudimentary mathematics. Thus, Schrödinger provided a practical tool, even if there is debate about what it actually means. We all make a decision: will we worry about this or accept it and move on. Those who choose the former either end up doing philosophy or going mad; I chose the latter—I use the equation, solve it, and it works. Why? Good question.

SC: Your book Antimatter illustrates the titular concept of antimatter, which Dirac had a significant hand in introducing to the world. What important clues about the origins and structure of the universe may be derived from the existence of antimatter?

SC: Before Antimatter, you had previously written about such topics as cold fusion and particle physics. What drove you to write a book about antimatter?

FC: I am a particle physicist, and my books have been about physics. I was astonished at the popular belief in the nonsense perpetrated in Dan Brown’s Angels and Demons about antimatter. So I set out to show that antimatter cannot make a bomb, fortunately, but regrettably, neither will it solve the world’s energy supplies, in contrast to impressions in that movie.

SC: Antimatter is generally considered a futuristic, science fiction-esque concept, yet Dirac is credited with developing the idea with a paper in 1928. How did Dirac devise the modern antimatter equation, and how was it received?

FC: By combining quantum theory with relativity to describe the electron, he found that the equations would not work unless the electron has a positively charged analogue—the positron. There was some confusion about whether this was the proton—at that time only protons and electrons were known (the discovery of neutron came only in 1932). Then J. Robert Oppenheimer pointed out that if this were the case, hydrogen would self-destruct by annihilation.

SC: We know that Dirac was a famously taciturn man, never saying more than he needed to. Based on what you’ve learned from his life, what sort of man was Dirac outside the lab?

SC: You’re a Professor of Physics at Oxford, and in 1996 you won the Kelvin Medal and Prize. From your involvement in the global scientific community, what would you say Dirac’s legacy has been?

FC: Monumental. His theory of QED (quantum electrodynamics) is the paradigm for modern theories of the strong and weak forces (QCD where C=chromodynamics and QFD where F = flavordynamics). The techniques that we learn as students are now very much due to Richard Feynman, who built on Dirac’s foundations. Feynman regarded Dirac as one of the greatest theorists of the 20th century; what better recommendation could one ask for?

SC: While researching Antimatter, did you learn anything surprising about Dirac’s life that you didn’t already know?

FC: I wasn’t researching Dirac’s life—Graham Farmelo has written on that superbly. From his book, I learned a lot, not least the background to his personality, the nature of his childhood, and his father, among others.

SC: Dirac’s Principles of Quantum Mechanics published in 1930 is a landmark in the history of science. It quickly became one of the standard textbooks on the subject. How indispensable was this book when you were studying physics? And is it still used today?

FC: I first saw his book in the local library as a child. I took it out because it had only been borrowed once, years before. I read the first page and didn’t understand it. Years later, as a student, I met the book again. It was hard to read even then. It is a beautiful summary of quantum mechanics for experts, but as a means of learning the subject from scratch, it’s very hard.

SC: In addition to your own work, what sources do you recommend to people interested in Dirac’s life and work?

SC: Your last book was The Infinity Puzzle: Quantum Field Theory and the Hunt for an Orderly Universe. What’s next on your list of projects?

FC: I am researching the life and work of Bruno Pontecorvo—“Mr. Neutrino,” who inspired the hunt for solar neutrinos, which led to modern neutrino astronomy. Halfway through his life, in 1950, he fled to the Soviet Union at the height of the Cold War and was described by a US Congress Committee at the time as the “second deadliest spy in history” (after Klaus Fuchs). But there was no proof that he spied. The result of his defection was that, in my estimation, he missed two Nobel Prizes—one because the Soviets refused to allow him to do an experiment outside the USSR (others did it in the USA and won the prize); he was also refused access to a reactor, or he would have discovered the neutrino, and he regrettably died before the solar neutrino experiments were finally resolved. I am calling the book A Life of Two Halves. Was he a spy? Well, I have met some very “interesting” people while researching this work, and it has taken me far beyond pure science. You will have to wait for the book!