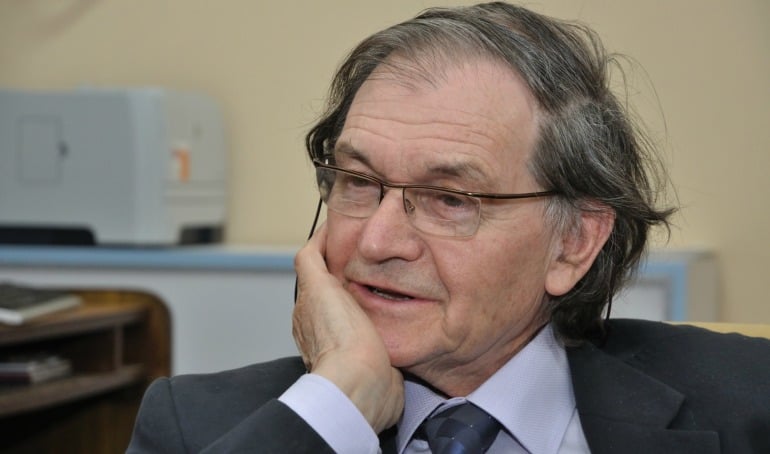 Sir Roger Penrose is known worldwide for his work in mathematics and mathematical physics, in particular, general relativity and cosmology. Currently Emeritus Rouse Ball Professor of Mathematics at the University of Oxford and Emeritus Fellow of Wadham College, he has been awarded numerous honors for his scientific contributions. His many books include The Emperor’s New Mind: Concerning Computers, Minds, and the Laws of Physics; Shadows of the Mind: A Search for the Missing Science of Consciousness; The Nature of Space and Time (with Stephen Hawking), and most recently The Road to Reality: A Complete Guide to the Laws of the Universe.

Roger Penrose: Hilbert was hoping to be able to formalize mathematics in a completely clear way so that the issue of whether a result was to be considered to be “proved” could be made completely unambiguous. This desire had been prompted by the appearance of “paradoxes,” such as Bertrand Russell’s “set of all sets that are not members of themselves.” If some area of mathematics could be formulated in such a way that the proof procedures are completely unambiguous and clear-cut (in a sense that I shall come to below), one should be able to make sure that contradictions, such as Russell’s paradox, didn’t occur (i.e., were not part of the accepted proof procedures), then that area of mathematics would be put on a sound basis.

Gödel’s Incompleteness Theorems showed that Hilbert’s program was unachievable—at least for sufficiently broad areas of mathematics (such as the ordinary number theory of the integers). Gödel showed that for such an area of mathematics, for any proposed formal system F (a “formalization,” in the above Hilbertian sense) which intended to describe it would always fail to be able to establish some result (that could be explicitly constructed in terms of the rules of F)—let us call this result G(F)—even though G(F) could be seen to be necessarily true, by methods outside the rules of F, provided that the rules of F could themselves be trusted as yielding only true results. In the form of Gödel’s result that is most commonly referred to is his “second” Incompleteness Theorem, in which G(F) effectively asserts that F is consistent, so the argument tells us that the consistency of F cannot be proved within the rules of F itself.

In my view, this has the appearance of somewhat downgrading the significance of Gödel’s theorem because it gives it perhaps a somewhat circular appearance, “consistency” being a somewhat internal matter of concern.

SC: How would you explain Kurt Gödel’s Incompleteness Theorem to a layman?

RP: I prefer to state Gödel’s result in a more direct way, using Turing’s notion of computation. The point about a formal system F is that it provides a proposed method of “proof” which has the character that the correctness of any such “proof,” according to the rules of F, is computationally checkable. That is to say, there is a computer program P[F] which when applied to any such “proof” will always say “OK” or “NOT OK” after a finite time. What Gödel tells us is that if we are presented with F which we “believe in” in the sense that we are prepared to accept as actually true any mathematical statement that P[F] says “OK” to a proposed proof of, then there is a specifically constructible mathematical statement G(F) which we must also accept as actually true, but which there is no “proof” within the rules of F which P[F] will say “OK” to.

To put this another way, if we accept F as giving us a sound set of procedures of mathematical proof, then we are able (via Gödel’s ingenious argument) to transcend the methods of F to see the truth of results that are beyond the scope of F. Thus, if we trust F, then we can transcend F.

SC: In your book, The Emperor’s New Mind, you made clever use of Gödel’s proof to advance the view that artificial intelligence is impossible, or that machines cannot think. Can you briefly explain the main thrust of your argument?

RP: The thrust of my argument is that the quality of “understanding” is something outside the capabilities of a computer. It is through understanding that we can use the Gödel argument to extend our belief in the trustworthiness of some F to the belief in the truth of G(F), even though G(F) is unobtainable by means of the rules of F. The generality of Gödel’s argument simply illustrates how powerful conscious reasoning (through understanding) can be. Just following rules (which is what computers do—albeit extraordinarily well) is something very different from understanding. (This is something that educationalists know very well!) I argue that understanding (whatever it is) requires “consciousness” (whatever “that” is!). To take the argument further, I take the view that the quality of consciousness is something that is potentially out there in the physical world, and is not necessarily something unique to human beings. But I regard the Gödel argument as showing that conscious understanding is something that cannot be properly imitated by a computer. So I argue that if consciousness is part of physics—describable by the “true” laws of physics—then the true laws of physics must be non-computable. It is known (using Gödel-Turing-type arguments) that there are many areas of mathematics that are actually non-computable, so I am claiming that the true laws of physics (not yet fully known to us) must also be non-computable. But the known laws of physics are (more-or-less) computable, so we must look outside the known laws. I argue, further, that the only plausible loophole in the laws that we know lies in the issue of quantum measurement, and that the “measurement paradox” (basically “Schrödinger’s cat”) points to where we need to make further progress in our understanding of the laws of physics in order to uncover what is actually non-computable in the true laws).

SC: It’s been 20 years since the publication of The Emperor’s New Mind. How has your viewpoint held up?

RP: In my book Shadows of the Mind, I developed these ideas quite considerably, mainly in three directions (1) strengthening the Gödelian argument (making it more rigorous) (2) improving my criterion for the onset of new physics, in relation to the “measurement paradox” (3) learning from Stuart Hameroff about microtubules, and taking the view that it must be at the level of neuronal microtubules, basically, (rather than neurons) that the required coherent quantum processes (and “non-computable beyond-quantum-mechanics” processes) must manifest themselves.

How has it held up? Of course, many people have remained skeptical. But despite the many (often aggressive) arguments from others, my arguments seem to me to have stood up well enough (and are described in the soon-to-be-published proceedings of the Vienna conference honoring Gödel’s centenary, with the approval of some of my sternest critics from the community of logicians). On the biological side, there are some recent very striking results concerning microtubules, but these are not published as yet. On the quantum physics side, there are some theoretical developments, but the (extremely difficult) experiments are still being developed.

SC: Philosopher J.R. Lucas advanced a similar argument in a paper entitled “Minds, Machines and Gödel” in the journal Philosophy in 1961. Are you familiar with his paper?

RP: Quite a lot. Turing was very impressed by Gödel’s argument, and he developed that argument further, phrasing it in terms of non-computability, more-or-less in the way that I have done (following Turing) above. Turing’s philosophical standpoint (at least later in his life) was different from Gödel’s, however. Gödel seemed to think that human minds must transcend physics, whereas my view is that conscious minds must transcend the presently known physics, but that physics is too limited. Turing seemed to base his later views on a computer model of minds in which the way around the Gödel theorems lies in the fact that conscious humans make mistakes. I try to argue in my books that this is an implausible let-out.

SC: Around the same time that Gödel was working on his Incompleteness Theorems, another logician by the name of Alfred Tarski was working with similar results. Why do you suppose Tarski’s work hasn’t garnered as much attention as Gödel’s?

RP: I don’t know the history well enough. There were several other logicians who were on to the same sort of issues that Gödel was. My guess is that Tarski’s results weren’t so developed as Gödel’s at the time, but I don’t really know the details. I had the impression that Gödel’s results were a bit of a bomb-shell though taking a bit of time to be appreciated fully.

SC: Another fundamental result that Gödel worked on was his proof of the consistency of two problematic hypotheses with the axioms of set theory in 1939. Can you briefly explain this?

RP: I think this must refer to the Gödel work that was carried on by Paul Cohen. They showed that Cantor’s continuum hypothesis and the axiom of choice (two famous assertions in mathematics) cannot be proved or disproved within one of the standard formal systems for mathematics (known as the Zermelo-Frankel system). This is very interesting, of course, but as we already know from the Gödel Incompleteness Theorems, proof within a specific formal system is not the same as being able to see that something in mathematics is true or false by general mathematical argument.

SC: Gödel also dabbled outside of his field of expertise by proving that time travel to the past was possible under Einstein’s equations. Should we give any credence to his proof?

RP: He only showed that such time travel was possible within his specific cosmology. This, of course, is fascinating, but we don’t now believe that this particular cosmological model actually holds for our own universe. Yet Gödel’s arguments were ahead of their time and certainly influential in the development of relativity theory.

SC: Like Gödel, you are a Platonist, who views mathematical truth as “absolute, external, and eternal, and not based on man-made criteria.” Is there any proof one can evince to support such a standpoint? Or is it just a belief?

RP: I think there are many possible different understandings of what “Platonism” means. Some “Platonists” like Gödel were very “strong Platonists” in the sense that they would believe that all mathematical statements must have an absolute truth value—so the truth is in a sense “out there,” and not the product of our minds, having some subjective aspect to them. In my own case, I do not feel so strongly as Gödel seemed to that all mathematical truth is objective, but I would probably go much of the way with him. There is a separate issue having to do with the basis of physical reality. Is physical reality based on a deeper mathematical reality? I think that my own picture is best expressed in my “Three-worlds” picture (in “Shadows of the Mind” and “The Road to Reality”), in which I indicate how the physical world, the mental world of conscious experience, and the Platonic world of mathematical forms inter-relate to one another via three “mysteries”. This is not really a belief system, however, but rather a clarifying picture, in my view.