MAIN MENU
Albert Einstein Interview Physics
Albert Einstein (1879–1955) remains to this day among the most famous and influential physicists, who developed the general theory of relativity, changing our understanding of light, gravity, and time. 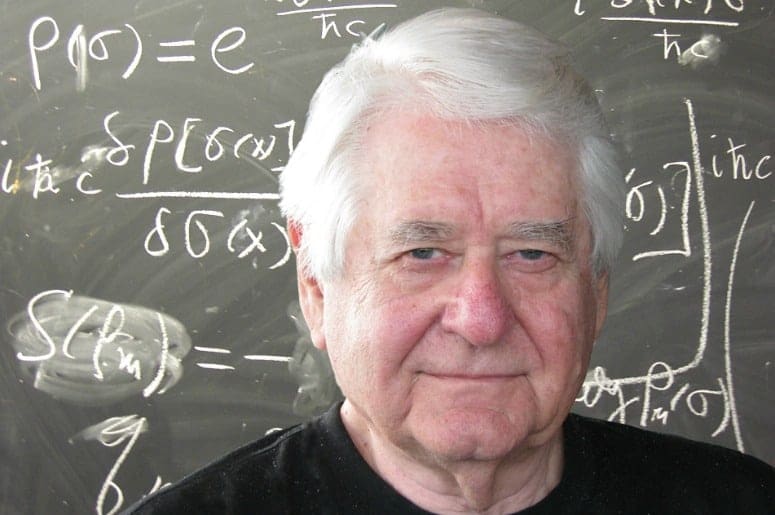 Not Defying Gravity: John Moffat on Albert Einstein’s Centenary Theory and Beyond

To this day, Albert Einstein (1879–1955) remains among the most famous and influential physicists, who developed the general theory of relativity, changing our understanding of light, gravity, and time.

A Canadian physicist and cosmologist, John Moffat is professor emeritus of physics at the University of Toronto, a senior researcher at the Perimeter Institute for Theoretical Physics, and adjunct professor at the University of Waterloo.  He is the author of several books: Cracking the Particle Code of the Universe: The Hunt for the Higgs Boson, Reinventing Gravity: A Physicist Goes Beyond Einstein, and Einstein Wrote Back: My Life in Physics.

Simply Charly: This month marks the 100th anniversary of Albert Einstein’s theory of gravity known as general relativity. Can you briefly explain what Einstein proposed in this theory?

John Moffat: Einstein generalized his special theory of relativity to include accelerated frames of reference. This led him through the Equivalence Principle to formulate a theory of gravity, in which gravity is described by the warping of space-time by matter.

JM: Newton’s and Einstein’s theories diverge when bodies such as planets orbit in space-time with a sufficient deviation from Euclidean geometry (curvature of space-time).

SC: In 1915, the renowned German mathematician David Hilbert invited Einstein to give a series of lectures at the University of Göttingen on his (as yet) unpublished General Theory of Relativity. Einstein was at an impasse on how to express his theory mathematically until Hilbert, later that year, published his solution to it. Why is Hilbert given very little credit for solving Einstein’s field equations of gravitation?

SC: Although Einstein was confident in his results, he felt it was important to test his theory by subjecting it to a battery of experimental tests. What were the three classical tests conducted to confirm the general relativity theory?

JM: The first of the classical tests was a post-diction—the perihelion advance of the planet Mercury, which agreed correctly with his theory and was published by Einstein in 1915. The second and third tests were the bending of light by the sun, and a redshift of light by the gravitational field of a massive body such as the sun.

SC: Beyond the three classical tests of general relativity, what others have been devised since or are being devised to test Einstein’s theory? And why is it important to continue testing his theory after repeated confirmations?

JM: The Shapiro time delay effect called the Cassini experiment has been confirmed with significant accuracy. The predicted 1.75 arc seconds bending of light by the sun was confirmed by a series of solar eclipse observations and culminated in a very accurate verification by Very-Long-Baseline Interferometry (VLBI) radio wave observations beginning in 1995. The redshift effect was subsequently confirmed for compact objects such as white dwarfs and pulsars.

Theories should continue to be experimentally tested. However, due to experimental limitations, it is not expected that any observable deviations from Einstein’s gravity theory will be detected in the solar system.

SC: A good chunk of our universe seems to be made up of things we cannot see or detect while a smaller percentage of it—the stars, planets, galaxies, you and me—are observable. Astronomers call this unseen stuff “dark matter” and “dark energy.” Yet despite decades of searching, these invisible forms of energy thought to hold galaxies together, are nowhere to be found. Why?

JM: The dark matter and dark energy are claimed to amount to about 96 percent of the matter-energy of the universe. After decades of effort, dark matter particles have not so far been detected. The success of the standard model of cosmology is based on the existence of some form of dark matter in the early universe. The dark energy is claimed to be responsible for the acceleration of the universe. The nature of this dark energy in the standard model is thought to be caused by the repulsive effects of the cosmological constant, introduced by Einstein in 1917. A possible rationale for the dark matter conundrum is that it is important in the early universe to explain the structure growth of matter to make stars and galaxies in the present universe, but that it is undetectable in the present universe today. This would demand that Einstein’s gravity theory has to be modified to explain in the present universe the dynamics of galaxies and clusters of galaxies. A successful modified gravity (MOG) has been published by me that can account for the current cosmological and astronomical data and agree with the data for galaxies, galaxy clusters, and the solar system without dark matter.

SC: In the 1950s, before you went to study physics at Trinity College, Cambridge, you were fortunate, over the course of several letters, to have corresponded with Einstein himself. What was the nature of your correspondence?

JM: I wrote two articles about Einstein’s unified theory that criticized some of its mathematical and physical developments. He corresponded with me regarding these papers and also his view of physics and, in particular, gravitation theory.

SC: Today, Einstein’s general theory of relativity remains, 100 years after it was first proposed, as our best explanation of the phenomenon of gravity. It’s considered part of the bedrock of modern physics. Yet, a small but growing band of physicists, yourself included, have proposed modified versions of general relativity. What chinks in general relativity’s armor have prompted these undertakings?

JM: Einstein’s gravity theory (General Relativity) is in full agreement with solar system tests. However, its predictions (and that of Newtonian gravity) fail when describing galaxy and galaxy cluster dynamics, unless as yet undetected dark matter is postulated to exist, or, his theory is modified to explain the data without dark matter. Unless there is convincing observational data discovered for the existence of dark matter in the present universe, then Einstein’s gravity should be modified. Moreover, gravitation theory and quantum theory have not, so far, been successfully united. A successful quantum gravity theory may well only be realized through a modification of Einstein’s classical theory.

SC: Although Einstein’s general theory predicted the existence of black holes or a “Schwarzschild singularity” as it was referred to in those days, he denied their existence altogether. Why did Einstein repudiate black holes which are now accepted by much of the scientific community today?

SC: Einstein’s quest for a Theory of Everything—that single key that would unlock all the secrets of the Universe—forever eluded him. Is this still a viable area of research? And if so, are we any closer today at deriving a true theory of everything?

JM: We are not closer today to discovering a Theory of Everything. The quest has not met with success in string theory and other attempted theories. It is possible that this is a fruitless search; the so-called Holy Grail of physics—may be an illusion.

SC: What projects are you currently working on?

JM: I am presently developing my modified gravity (MOG) applying it methodically to the available cosmological and astrophysical data. I have also published two papers on MOG-black holes, predicted by the theory and its field equations. The shadows produced by orbiting photons around the MOG black hole can differ in size from the shadow size predicted by Einstein gravity. It is hoped that the upcoming Event Horizon Telescope observations will be able to distinguish between the MOG black hole and Einstein black hole shadows. I also work on an alternative to inflation theory called Variable Speed of Light (VSL) Cosmology. It solves the initial value problems of cosmology, and its predictions agree with the current data. I continue studying black holes in my modified gravity theory. Additionally, I work on attempts to solve the Cosmological Constant Problem, using my Non-local Quantum Gravity theory, which is a viable theory of quantum gravity. I have published papers on a non-local version of quantum field theory that can resolve “naturalness” problems in the standard model of particle physics. A naturalness problem occurs in the standard model when the mass of the Higgs boson, discovered at the Large-Hadron-Collider at CERN is calculated; the calculated mass is far too big or even infinite. My non-local field theory version of the standard model yields the correct value of the Higgs mass.