MAIN MENU
Biology Charles Darwin Interview
British biologist Charles Darwin (1809–1882) laid the foundations of the theory of evolution and transformed the way we think about the natural world. Few books have influenced the human thought more than his On the Origin of Species. Published in 1859, it expounded his theory of natural selection, shocking society and revolutionizing science. 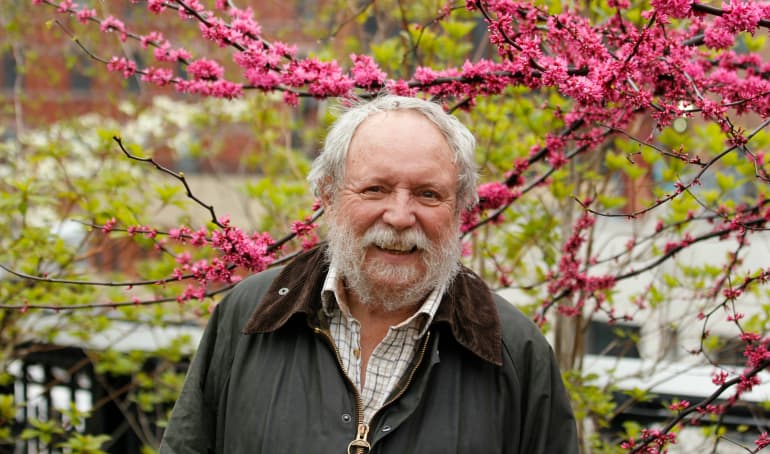 Michael Ruse On Charles Darwin: Evolution Is No Monkey Business

British biologist Charles Darwin (1809–1882) laid the foundations of the theory of evolution and transformed the way we think about the natural world. Few books have influenced the human thought more than his On the Origin of Species. Published in 1859, it expounded his theory of natural selection, shocking society, and revolutionizing science.

A professor at Florida State University, Michael Ruse specializes in the Philosophy of Biology, with particular attention on Darwin. He is the author of numerous works, including Darwinism and its Discontents (2006), The Evolution-Creation Struggle (2005), and many others.

Simply Charly: How did Darwin first come to accept evolution and which kinds of evidence most influenced his views?

Michael Ruse: He accepted evolution around March 1837. Clearly, a number of things were important, but the geographical distributions of the organisms he had seen in the Galapagos were very important. Empirical evidence was not the only thing, however. By this time he had become a deist—God works through unbroken law—and he knew about evolution from his grandfather, from Lyell who discussed Lamarck, and from Robert Grant when he was a student at Edinburgh. So it was as much a metaphysical shift as a scientific one.

SC: One of the unanswered questions remains whether Darwin believed in evolution during the Beagle voyage. Darwin said that as far as he could remember he still believed in the fixity of species—derived from the ideas of Plato, Aristotle, and Carolus Linnaeus—but that vague doubts occasionally flitted across his mind. What is your view?

MR: Almost certainly Darwin did not become an evolutionist on the Beagle voyage. It was six months after returning home, especially when the ornithologist John Gould had looked at his bird specimens and declared them different species. Then Darwin knew he had to embrace evolution.

SC: Darwin is commonly considered to be the father of evolution, but in reality, others preempted him, including his own grandfather Erasmus, French scientist Jean-Baptiste Lamarck, and Scottish geologist, Dr. James Hutton. Were Darwin’s views in any way influenced by the others before him, or did they differ?

MR: I am sure that these people I would add Robert Grant as important—influenced Darwin. I would not in any sense speak of Darwin as a follower of any of these people—apart from anything else he had a much more tree-based view of evolution than earlier people (thanks to the Galapagos being a big inspiration). He did always accept so-called Lamarckism, the inheritance of acquired characteristics. But this was not unique to Lamarck—it is in his grandfather’s thinking—and only played a minor role for Lamarck.

SC: Darwin’s contemporary, Alfred Wallace, presented his theory of evolution by natural selection at the same time, in July 1858. Was there any divergence of views between the two theories, and why did Darwin become known as the “father of evolution” but not Wallace?

MR: The two men had the same idea—although perhaps Wallace was a little more inclined to see the struggle at the group level and Darwin at the individual level. In his essay, Wallace argued against an analogy with the domestic world (because we never change a pig into a horse) whereas Darwin argued for it.

Darwin deserves the major credit because he was first by twenty years, he backed up his thinking with a full-blown theory about the fossil record, biogeography, embryology, and more, and because it was he who built a band of supporters like Thomas Henry Huxley.

SC: Darwinists claim that genetic engineering and many medical advances have been made possible by the evolutionary hypothesis. Others argue that no application of evolutionary science led to these discoveries and that Darwin’s theory, while widely accepted by the scientific community, remains unprovable. What is your view?

MR: There are two questions here. I would say that the basics of Darwin’s theory have been proven—that argument is over. Whether Darwinism plays into genetic engineering and medicine seems to be another question, and frankly, I am not sure how much it has to say that is relevant to these issues.

SC: Is it totally inconceivable to find common ground between evolutionists and creationists?

MR: Yes. It is not just a theological issue but also a social one as evolution represents modernism, sex ed, abortion on demand, and so forth (when I say represents, I mean acts as a marker for people who have these sorts of beliefs). Creationism stands for anti-modernism (anti-abortion and so forth). I don’t see much hope for a meeting of the extremes; whether people more in the center can be influenced is, of course, another matter. I very much hope so.

SC: Darwin’s wife Emma was deeply religious. Did this create any conflict between them, and do we know for sure what, if any, was Darwin’s personal faith? He once defined himself as an agnostic, but some published reports claim he accepted Christ on his deathbed. Is this truth or fiction?

MR: Towards the end of her life, Emma’s religious beliefs started to fade, as they did for so many Victorians. Darwin was first a Christian, then about halfway through the voyage became a deist believing in a God but not one of miracles, and denying the divinity of Christ (as well as all the stuff about hellfire and so forth), and then in the last ten to fifteen years of his life, perhaps because of the influence of Huxley, this faded into agnosticism. Darwin never became an atheist, and he certainly did not convert on his deathbed. There was a bit of tension between husband and wife, but they kept it to a minimum. His daughters were more eager to downplay his lack of belief than was his wife.

SC: If it’s true that all theories of science are fallible, and new data often negates and overturns previously held theories, are there any flaws in Darwin’s theory? Are any mainstream scientists today disputing or at least re-thinking the theory of evolution?

MR: No mainstream scientist denies evolution or that natural selection is very important. There are debates about how important it is. I suspect that some people think macro changes might be significant while others think genetic drift important, but by and large, it is important to see these as debates within limits.

SC: Some historians believe that, by suggesting that some races had evolved further than others, Darwin fuelled the development of racism, and, later, Nazism. What is your view?

MR: Total bullshit. Of course, the Nazis used quasi-social Darwinian terms but, by and large, they did not like evolution because it showed that we are all Jew and Gentile of one race. The difference between The Descent of Man and Mein Kampf is simply huge. Hitler owed more to Austen Chamberlain and others like him than to Darwin.

SC: What does your research into the philosophy of biology entail, and how does it relate to Darwin?

MR: I am interested in the foundations of morality and if ethics is an adaptation, like hands and teeth (I think it is), then in some respects my work is very Darwinian, but I am not interested in building models of cultural evolution. I am inclined to think that meme-talk is nonsense.

I am also interested in the science-religion relationship and trying to show how one can be religious in an age of science. (I am not a believer, but I think finding some middle way is vital to making a place for evolution in our society today).

And I am really interested in Darwin and his contemporaries—I am just about to write an essay for a new edition of Huxley’s Evolution and Ethics.