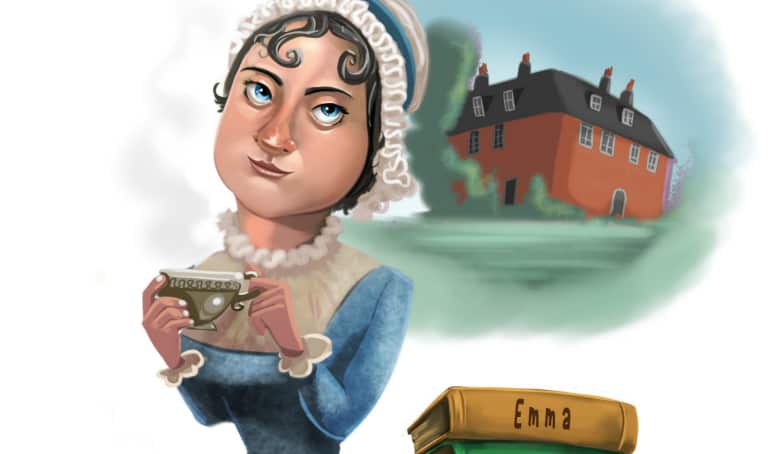 1. Although Jane Austen (1775-1817) never married, she did become engaged once, for only one night. She accepted a proposal from a family friend, Harris Bigg-Wither, during a visit to Manydown Park on December 2, 1802. The next morning, however, she had a change of heart and left Manydown immediately.

2. Austen was born in and spent her whole life in a rural area, leading a sheltered country existence. She did, however, travel extensively, including to London, Kent, and Bath. As dictated by the conventions of the era, she was always accompanied on her trips.

3. Even though Austen’s six published novels are considered to fall under the category of “women’s literature,” she had quite a few male readers: British Prime Minister Winston Churchill and author Rudyard Kipling, among others.

4. Austen’s first customer was a man. In 1811, the Prince Regent was the first one to purchase her first published novel, Sense and Sensibility.

5. Decades after her death at 41, a cult following developed in the United Kingdom and eventually spread across the Atlantic. “Janeites,” as her fans are known, appeared after A Memoir of Jane Austen was published in 1870.

6. As a woman living during the Regency Period, Austen did not wield any political or social power. Her works have, however, been cited 27 times in American courts. References to Mansfield Park, Northanger Abbey, and Pride and Prejudice have been mentioned in legal decisions in municipal, state, and federal courts.

7. In 2013, the British minister of culture banned US singer Kelly Clarkson from exporting a turquoise ring once owned by Austen, calling it a national treasure.

8. On July 18, 2017, the Bank of England marked the bicentenary of Jane Austen’s death by officially unveiling a new £10 note in her honor.

9. In 1816, Austen started to suffer from a debilitating and painful illness. It was not identified at the time, but today medical experts believe the ailment to be Addison’s Disease, which affects kidneys.

10. Her gravestone in Winchester Cathedral doesn’t say that Austen was an author. Her family thought this fact wasn’t worth mentioning.