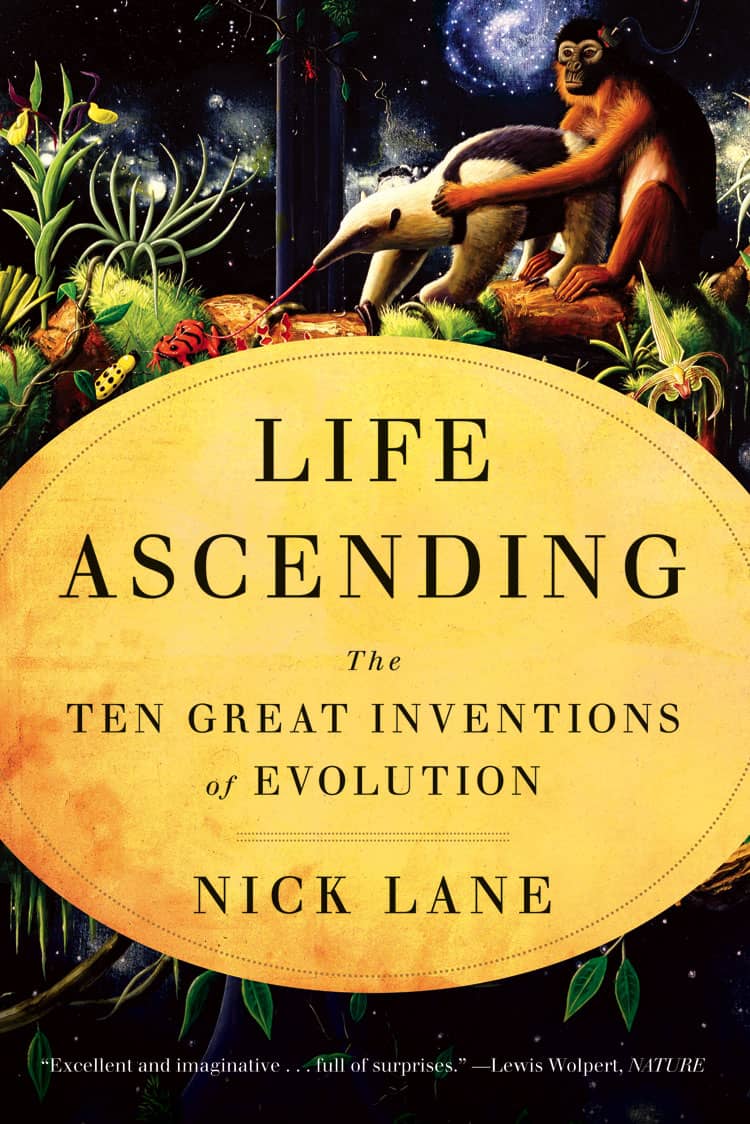 Life Ascending, by the author of Oxygen: The Molecule that Made the World and Power, Sex, Suicide: Mitochondria and the Meaning of Life, takes readers on a journey through 10 leaps of evolution along with the scientific discoveries that made these feats of natural engineering comprehensible. Nick Lane’s signature events in evolutionary history, chosen for their iconic status and game-changing novelty, are the origin of life, DNA, photosynthesis, the complex cell, sex, movement, sight, hot blood, consciousness, and death. With each “ascent” up the ladder of life, Lane, a biochemist himself, describes the scientific detective story that led to the contemporary theories of its evolution, complete with tidbits about the personalities (physicists, biochemists, geologists, and other, lesser-known scientists) behind the insights into the making of human beings (we’re the pinnacle to which the “ascent” leads).

The analysis often hinges on chicken-and-egg scenarios, in which one element of a natural complex seemingly couldn’t have arisen without another, related complex, which, in turn, had difficulties of its own in coming to be. Creationists, or proponents of “intelligent design,” call these features “irreducible complexity:” Structures that supposedly could not have arisen by drips and drabs, but needed some Author of Life to drop the whole apparatus wholesale into history. The eyeball is a favorite among creationists, something that “couldn’t have gotten here” without God. Lane tackles the eye in Chapter Seven and the origin of living cells, another “couldn’t have happened by itself” moment, in Chapter One. Each time, Lane teases out the complex biochemistry of these achievements along with the environmental and geological circumstances that put the proteins, amino acids, and other compounds together in the first place, showing how the seemingly irreducible complexity can be explained as a process of change over time, as organisms adapted to each other and their surroundings.

But Lane doesn’t only address creationists in some apology for contemporary science. He also addresses those who already have some familiarity with evolutionary theory and want to know about the developments that have taken place in just the last few years. Much of the material in the book hasn’t yet made its way into the textbooks, and, in several instances, the jury is still out as to the relative strengths and weaknesses of differing theories. This “fresh off the presses” feeling keeps the book interesting even when the science is difficult for lay audiences. If you haven’t taken a science class recently, you will find yourself asking, “What was the Krebs cycle, again? And what is the difference between a gene and a chromosome?” The fact that non-specialists can follow the book at all is a tribute to Lane’s interpretive skills, and the many refreshers throughout the book make it more accessible. Grayscale photos and diagrams (pictures of ocean vents, a cartoon of the Z scheme of photosynthesis, photos of stromatolites and eyeless shrimp), are included to keep readers on track, at key moments.

A few examples are to illustrate the approach. Those who have read Descartes or other early modern proto-scientists will know that muscle action was often interpreted as pneumatic in nature. The soul communicated with “animal spirits” in the nervous system, which was held to be a network of fine tubes, to inflate some areas and deflate others. In much the same way as an old-fashioned hand pump brought the water to the surface of a well, the action of the soul on wind-like animal spirits generated pushes and pulls that set the parts of the body in motion. Overcoming this view required magnification, which has its own research and development history, culminating in X-ray crystallography in the last half of the 20th century, which finally made it possible to see the interactions between myosin and actin filaments responsible for muscle movement. Lane traces these motor proteins all the way back to their bacterial ancestors, showing a complex pattern of chemical development. Descartes himself would have been pleased to sacrifice his “animal spirits” to learn the real mechanism behind movement.

In much the same way as Life Ascending explains the action of muscle on a biochemical basis and deciphers the evolutionary history of its development, the phenomenon of sight also receives a chapter (172-204). To this day, the eye remains for creationists an example of “irreducible complexity,” something that could not have gotten there without a designer. The reasoning seems to go that all of the parts are interlocking, that, without any one of them, the eye could not function, and that therefore eyesight must have appeared all at once rather than developing over time. “What use is half an eye?” runs the design-based jab at evolution (175). As it turns out, half an eye may be quite useful indeed, as the simplest retina (a light-sensitive sheet of cells) can do at least some of the work that our own complex eyes do. Lane traces the development of the eye back to the very same ocean vents that began the whole story of life in Chapter One: This time, a shrimp thought to be eyeless actually has tiny unprotected retinas strapped directly onto its back. Even trilobites could see, though with a mineral-based eye different from our own liquid protein crystals. Getting to the complex eye requires many discrete steps, with the addition of a curved lens yielding a better picture and a support network supplying large quantities of oxygen. Finding something recognizable to our own makeup in a trilobite or a shrimp makes Lane’s account fascinating and convincingly puts design-based objections to rest.

Life Ascending shows the non-specialist how genealogy, biochemistry, and geology all worked together to lead to the development of life on earth and teases out how even the most complex “inventions” could have evolved without the chicken-and-egg circularity that would point to divine fiat. The real story—and Lane’s book offers, at least, an outline of that story—is more interesting than something pre-determined ahead of time. The remarkable flexibility and adaptability of life makes the human species part of a much larger drama, one lasting billions of years. But, for being unscripted, the story is that much more amazing.

Seth Kaplan is a freelance writer residing in Portland, Oregon.