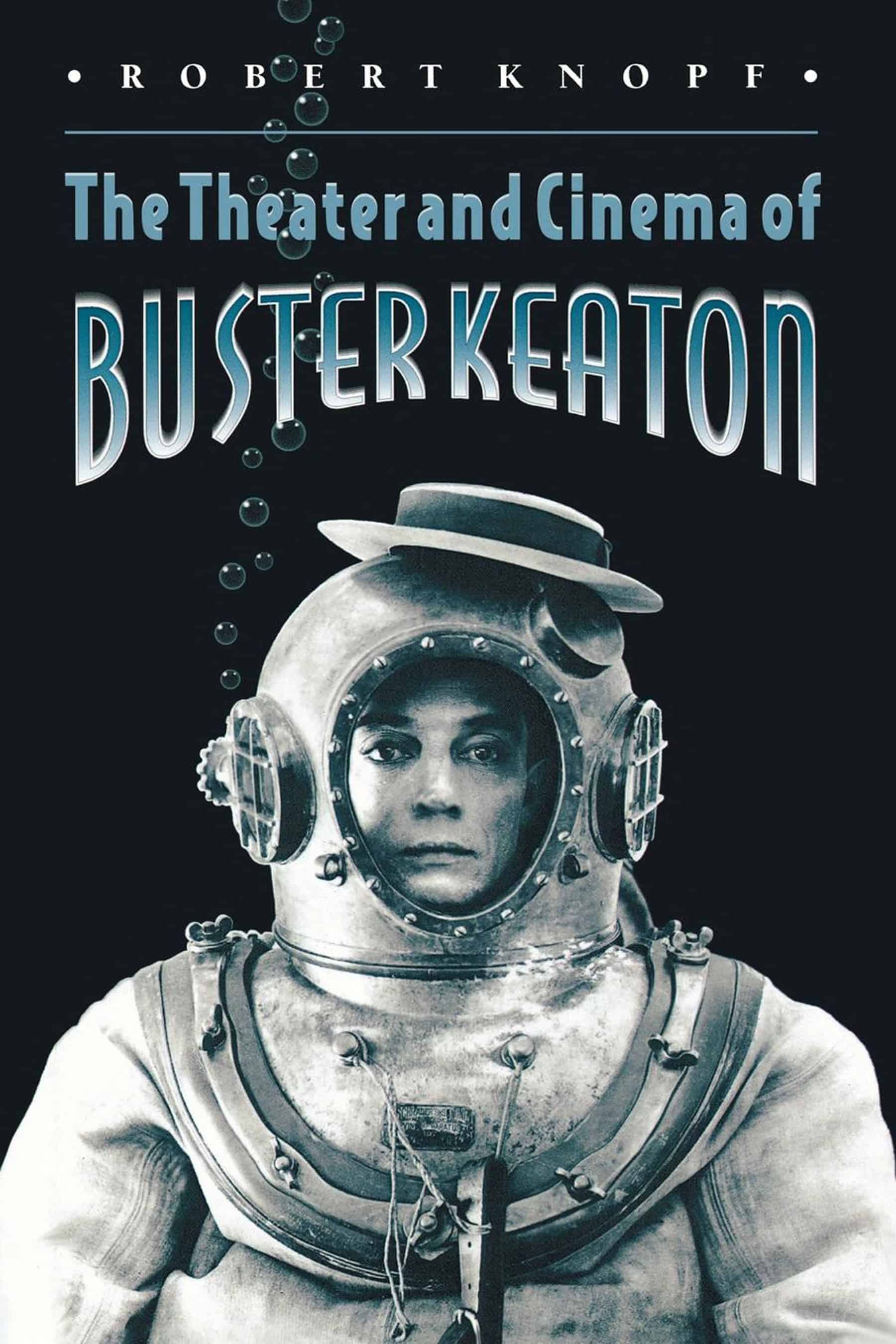 Robert Knopf begins his examination of the work of the great film comic Buster Keaton by surveying and describing the three main viewpoints that have informed Keaton criticism over the years: classical Hollywood, vaudeville, and surrealism. In keeping with the broader range of his subject, Knopf refers to these lines of criticism as “lenses” through which Keaton’s work is viewed. Briefly, he tells us that “critics who analyze Keaton’s films through the lens of classical Hollywood cinema stress narrative as the dominant feature of his work” (p. 5). In other words, causality is a primary feature of their outlook. Thus, for many of these critics, The General is Keaton’s masterpiece. Although narrative and causality are not necessarily strong points of Keaton’s silent (or most early film comics’) work, Knopf shows other features of the Keaton oeuvre that fit within the classical Hollywood reading such as his use of space. But he is quick to point out that even that sensibility was molded during his time in vaudeville, where he began as a child performer doing knockabout skits with his mother and father. (In fact, his given name is Joseph, after his father. According to Keaton lore, he was given the name “Buster” by Harry Houdini, who witnessed Keaton as a toddler fall down a flight of stairs without injury or complaint.) Knopf also discusses the debate between those who view Keaton’s work through the “lens of classical Hollywood” and those for whom the “lens of vaudeville” is primary. Knopf, himself, prefers a mixture of the latter with the “lens of surrealism.”

Vaudeville is where Keaton not only got his show-business start in the family act, to which he belonged his entire vaudeville career, but where he learned and polished gags he later translated to film. And, as Knopf reminds us, where he learned to relate himself as a physical comic to the mise-en-scene. To that end, Keaton favored long shots so that the film audience had the same relationship to viewing his work as the earlier vaudeville audience had. With regard to the “lens of surrealism,” Knopf explains that “Keaton never intended to create surrealist films, yet the ways in which his films challenge logic, reason, and causality influenced the surrealists, who saw in his films and those of many of the silent film comedians an involuntary surrealism” (p. 17). The book primarily examines the vaudeville and surrealist elements of Keaton’s work. When Knopf does look closer at the classical side of Keaton’s work he allows for the believability aspect of the narrative but finds that Keaton used film in such a way that the fantasy of the vaudeville skit (at least the Keaton type of skit) is taken to the limit of believability. As such, “the ensuing blend of the marvelous and the real,” he writes, “pushes the boundaries of classical Hollywood cinema to its limits, if not beyond” (p. 111). However, Knopf acknowledges that it was the group of critics oriented toward the classical Hollywood viewpoint that initially, in the early 1960s, discovered the artistic greatness of Keaton’s silent films and enshrined those films in the canon.

As you might have surmised, one thing this book is not is an exhaustive look at Buster Keaton’s work. Instead, it focuses on the 19 shorts (18 were two reels long, and one was three-reels) and 13 feature-length films over which, with the exception of his first feature, The Saphead, Keaton had artistic control under producer Joseph Schenck, (The Saphead, was made at Metro Pictures where Keaton was on loan and Keaton’s creative input was minimal.) The sad story of Keaton’s slide during the sound era has been told elsewhere and is not the purview of this book. A bad contract with Metro-Goldwyn-Mayer (MGM) all but ruined him by taking away creative control. MGM dropped him after he had appeared in eight moderately successful films in four years, but as Knopf points out Keaton’s slide into “oblivion” was mitigated by his post-MGM work, which lasted until the end of his life: educational films, shorts for Columbia Pictures (the studio home of the Three Stooges), and appearances in various features notably: Sunset Boulevard (1950), Limelight (1952), It’s a Mad, Mad, Mad, Mad World (1963), A Funny Thing Happened on the Way to the Forum (1966), as well as four of the teen-oriented beach movies that were popular in the mid-1960s. Knopf also examines two of Keaton’s final films, Film and The Railrodder (both released in 1965). Because of the book’s emphasis on those films over which Buster Keaton exerted artistic control, his formative years in the movie industry, when he worked as a sidekick to Fatty Arbuckle, are overlooked. These were the years when he learned film technique (from Arbuckle, who was a close friend) and overcame his vaudevillian prejudice against the art form that eventually killed off variety theater.

As Knopf reveals not only did Keaton’s vaudeville career influence his sense of space and the physical gags in his films but he also mined a visual duplication of himself that dated back, as old publicity photographs reveal, to when he played an impish, smaller version of his father in the family act. In fact, all three Keaton’s were made up to appear like the stereotypical Irishman of newspaper cartoons, and later, when his younger sister and brother were old enough to perform, the duplication extended to five Keatons. In his silent films, Keaton’s duplication tricks ranged from The Boat, in which Busters two “sons” also wear the distinctive Keaton pork pie hat (the pork pie hat and the impassive visage were as distinctive for Keaton as the horn-rimmed eyeglasses were for Harold Lloyd or the tramp outfit and brush mustache for Chaplin) to The Playhouse wherein Keaton duplicates himself numerous times, as conductor and musician in an orchestra, as members of a minstrel show, and as members of the audience. The multiplicity was not confined to images of himself. Knopf shows us how dozens of police officers in Cops, brides in Seven Chances, and even cattle in Go West all managed to harass or perplex the put-upon Buster. This multiplicity of a large group acting chaotically can only work to heighten the comedy in long shots where the space in the camera’s eye can accommodate them. And contrast their number with the singular Buster, who is usually the focus of attention.

Knopf not only discusses the surrealists’ being enamored with Keaton’s films (though he does mention that silent comedians generally appealed to their sensibilities) but provides clues as to why he appealed to them. Like the surrealists of the 1920s and 1930s, Keaton’s silent films featured juxtapositions, grounded in reality, that presented the commonplace in a new, often hilarious, manner. Knopf observes, “Keaton’s gags frequently exhibit an attitude toward objects akin to that of surrealism. He is forever using objects in unusual and unforeseen ways…” (p. 127). And while things become irrational in a Keaton film, the irrationality is heightened by mise-en-scene, which itself is realistic.

A slight drawback to the book is that Knopf occasionally falls into the trap that many Keaton critics have found themselves: the seemingly unavoidable triadic dialectic of the “three great silent comics.” Here, as elsewhere, Keaton’s art is promoted at the expense of Charlie Chaplin’s, and to a lesser extent Harold Lloyd’s. Perhaps this is a picayune complaint, but it does seem as though there is a slight and needless sense of inferiority regarding Keaton that lingers behind this argument.

Knopf ends the book with explications of two of the last three films Buster Keaton appeared in The Railrodder and Film. For some reason, he excludes the posthumously released The Scribe (1966). The Railrodder, directed by Gerald Potterton, follows Buster’s exploits on a rail trip across Canada. Some have considered it a coda to The General (though its narrative is sketchier). Film, on the other hand, was written by Samuel Beckett, and directed by Alan Schneider. Knopf makes no bones about his preferences between the two: “Gerald Potterton gave Keaton much greater freedom to improvise and collaborate… than Alan Schneider allowed him…” (p. 135). Interestingly, Knopf reveals Keaton turned down the role of Lucky in Beckett’s Waiting for Godot (he does not elaborate, but one speculates if this was the celebrated 1956 Broadway production featuring E. G. Marshal as Vladimir and Bert Lahr as Estragon). Perhaps this factoid is mentioned as a hint of what lay behind Alan Schneider’s antipathy toward Keaton, which Knopf does not downplay. Or at the very least to rationalize Knopf’s own antipathy toward Schneider because of the latter’s attitude of dismissal regarding one of the great film comedians. But Schneider was far from the first person in show business who condescended toward or disdained Buster Keaton, and he may have only been relaying Beckett’s famously hardline attitude that the texts of his plays were written in stone.

Knopf ends the book in a lovely, but all too brief, way with quick descriptions of the work of two men whom he believes are Buster Keaton’s true artistic descendants: the “new vaudevillian” Bill Irwin and the comic martial arts action hero Jackie Chan. For both men physicality lay at the heart of their gags, Irwin on stage and Chan in film (thus representing both sides of Keaton’s professional persona). Not only their styles of comic delivery, but also their senses of space reflect Keaton’s as well. But this book was published at the end of the last century, and one wonders who the main torch-bearers of Buster Keaton’s legacy are these days.

Frank Caso is the author of Robert Altman: In the American Grain. He lives in Hartford, Connecticut.