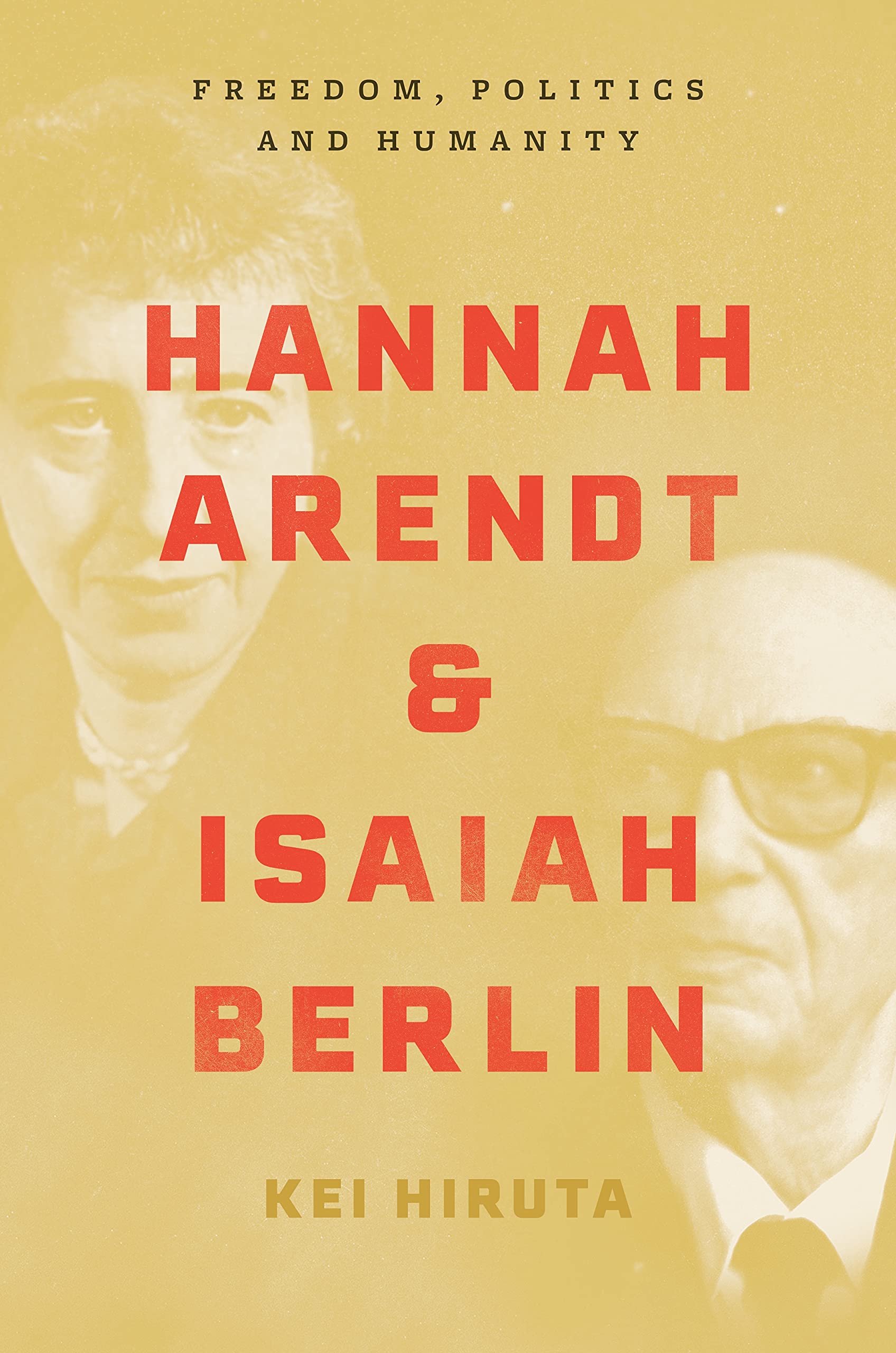 Both were preeminent political theorists. Both were contemporaries (she was born in 1906, he in 1909). Both were Jews. Both were émigrés (she from Germany to the United States, he from Russia to England). Both were prominent critics of totalitarianism. Both of their stars shine even more brightly after their deaths (hers in 1975, his in 1997).

One might think, then, that Hannah Arendt and Isaiah Berlin would be kindred spirits with much to talk about. If so, one would be wrong. Berlin detested Arendt and her work. Arendt regarded him with haughty disdain. She had little to say about Berlin; he had quite a lot to say about her. Berlin wrote that Arendt was “a real bête noir to me—in life, and after her death. I really do look upon her as everything I detest most.”

In Hannah Arendt and Isaiah Berlin, Kei Hiruta sets himself the task of discovering how and why this lifelong enmity emerged and grew.

The Harvard historian Arthur Schlesinger Jr. was friends with both and, thinking that they would have much in common, introduced them in 1949. As he later recalled, “Years ago, I brought Hannah and Isaiah together . . . . The meeting was a disaster from the start. She was too solemn, portentous, Teutonic, Hegelian for him. She mistook his wit for frivolousness and thought him inadequately serious.” First impressions can—and in this instance did—last a lifetime. After relating Schlesinger’s story, Hiruta amasses a wealth of information to show that their enmity sprang from and was fed by more than their differing personalities or philosophical styles. He unearths deep theoretical differences between the two thinkers.

The broadest and deepest division between Berlin and Arendt was that they belonged to very different philosophical schools or traditions, she from Continental idealism and he from British empiricism. She dismissed modern British philosophy as shallow and superficial. He derided Continental philosophy as unnecessarily opaque and pretentious.

Consider next their different conceptions of freedom (and its cognate, liberty).  For Arendt, who harks back to ancient Greece and Rome, liberty is the freedom of the citizen to participate in politics, to discuss, debate and decide matters of common concern. Since only free-born males could be citizens, others—women, slaves and metics (resident aliens)—were not and could never be citizens, and thus were not free. Those who were eligible to be citizens but chose not to participate in politics were scorned and called by Greek democrats idiotes (the root of our word “idiot”). In short, freedom, for Arendt, was elitist and exclusive.

In his important and influential essay, “The Liberty of the Ancients Compared with that of the Moderns” (1819),” Benjamin Constant draws a distinction that is applicable here. Arendt’s conception of freedom corresponds to Constant’s ancient liberty—the freedom to participate in making the laws under which one will live.

Berlin, by contrast, believes that life for citizens of the Greek city-states would have been a kind of low-level hell, suffocating and stultifying in its intrusion into their lives. Of course, if that way of life—the bios politikos—is freely chosen, then well and good, in Berlin’s view. But to be badgered or pressured into participating in political life is not to be free but unfree, at least in the modern sense. Berlin subscribes to a distinctly modern conception of liberty, which he famously called “negative liberty.” This is freedom to choose among available alternatives without external constraint and coercion. One is free when one can retreat into a protected zone of privacy in which one can think and express one’s own views, however odious or unpopular they might be. Here he owes, as he proudly admits, a great debt to John Stuart Mill. Mill argued against the idea that the state—and, even more, popular opinion—should have sway in determining what individuals think and do. Individuals should be free to say and do as they choose, so long as his or her speech or actions do not produce consequences that adversely affect or harm anyone else. Mill’s so-called harm principle is sometimes crudely rephrased as “My freedom to swing my arm ends where your nose begins.” In the liberal society envisioned by Mill and Berlin, one should be free to develop one’s talents to their fullest and engage in widely different “experiments in living.”

The exact antithesis of liberal society is totalitarian society. And here again, Arendt and Berlin differ. Arendt held that totalitarian society is an entirely new and utterly unprecedented twentieth-century phenomenon—“a novel form of government.” Berlin believed that totalitarianism is merely an extension of the kind of tyranny known since ancient times. He did, however, offer a backhanded compliment by saying that The Origins of Totalitarianism (1951) is the “least bad” of her books.

Arendt’s paradigmatic totalitarian state was Hitler’s Nazi Germany, from whose clutches she had escaped as a young woman. Berlin’s model totalitarian state was Stalin’s Soviet Union. The former had an ideology based on race, the latter on social class.  Both were alike in claiming total control by, in part, controlling information through censorship, surveillance, propaganda, and other means; by creating a collective narrative consisting of “alternative facts”; by constructing a massive system of forced labor camps; by singling out and scapegoating groups said to be “enemies of the people”; and so on, through a rather long list.

One cog in the Nazi machinery of death—Adolf Eichmann—was captured in Argentina by agents of the Israeli Mossad in 1960. In 1961, he was brought to trial in Jerusalem. Arendt attended the trial as a reporter for The New Yorker. She originally intended to write a single article recounting its details in brisk descriptive prose. As it turned out, she wrote a series of articles examining the nature of evil itself. In 1963, her collected observations and judgments were published as Eichmann in Jerusalem: A Report on the Banality of Evil, not only describing the trial but probing the nature of evil itself.

To say that Eichmann in Jerusalem proved to be controversial would be an understatement. It produced a firestorm of invective and denunciation, and a “civil war” among the New York intellectuals, many of whom were Jews. Arendt had attended the trial, expecting to find a monster on the dock. What she saw instead was a meek, mild-mannered clerk or functionary remarkable only for his ordinariness. How, she wondered, could an ordinary man be complicit in such extraordinary evil? At least part of the answer is given in the subtitle of her book: “the banality of evil.” Critics contended that this mischaracterizes and demeans the enormity of the evil of the Holocaust.

Even more controversial was Arendt’s contention that Jewish leaders—though not ordinary Jews–had been complicit in assisting rather than resisting the destruction of their own people. Some critics claimed that she was a “self-hating Jew” who “blamed the victims” instead of their Nazi murderers. And, not least, her critics denounced what they took to be Arendt’s unfeeling arrogance. To his discredit, Berlin signed on, explicitly or implicitly, with these attacks on Arendt.

Kei Hiruta examines this and other episodes with exemplary clarity and insight. For anyone interested in the lives and thought of Arendt and/or Berlin, his book is a “must” reading.