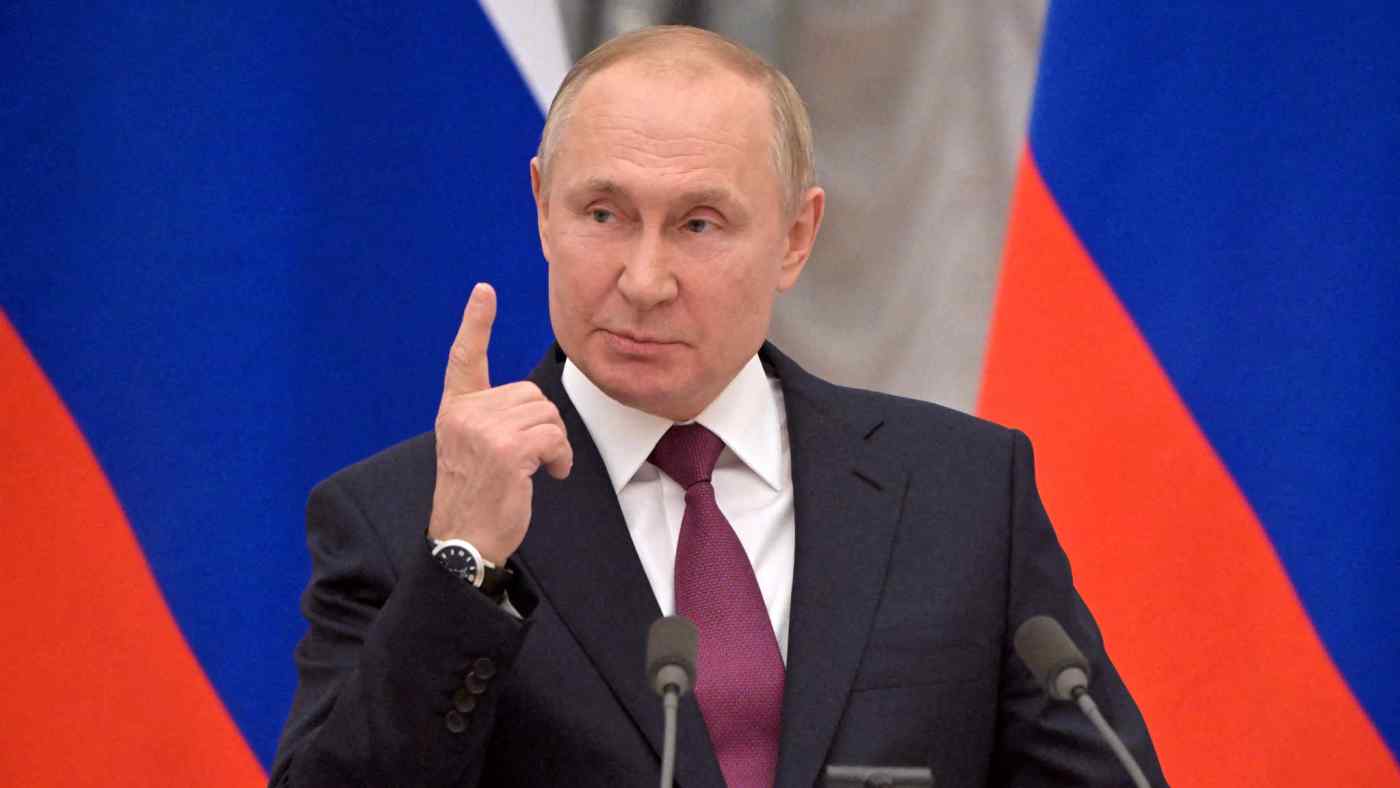 The similarities between Vladimir Putin and Napoleon Bonaparte are at once striking. Napoleon was at the apogee of his career and power in the summer of 1807, having just won a series of battles across central and eastern Europe, culminating in the Treaty of Tilsit, signed by Tsar Alexander I and himself. It gave Bonaparte much new territory in the German States, Prussia, Poland, and Russia. The French occupied central Europe and now included the new Duchy of Warsaw, all these states paying vast sums in “tribute” to Napoleon and his clientèle. Clearly, the great man could do whatever he wished—threaten kings, invade any country, and always win. There was no other power on the Continent of Europe to stop him. All these grand “achievements,” one spectacular success after another, in turn, led an overconfident Napoleon to overreach himself, making a series of badly judged decisions thereafter.

Bonaparte dismissed Foreign Secretary Talleyrand, the only senior member of the government to give him sound advice, including NOT to invade Poland and carve out the Duchy of Warsaw for himself, and NOT to seize a third of Prussia and large parts of the German states and Austria—advice which Napoleon completely ignored. (Alas, Putin has no Talleyrand.) Talleyrand criticized him, and Napoleon did not like criticism. On returning to Paris, the Tribunate (legislature) and press also criticized him. Napoleon dissolved the Tribunate and suppressed the offensive newspapers. He now had even more grandiose ideas than before, and would not tolerate opposition. He raised a new barrier between himself, his staff, generals, and friends by establishing elaborate court procedures, rendering any future familiarity with Napoleon impossible, including the use of the familiar “tu” even by family and his celebrated Maréchaux. Indeed, even his brothers had to address him as “Sire.” Napoleon’s paranoia and sense of grandeur were growing apace. And if someone got in his way, he could be arrested and thrown into prison, or murdered. No opposition, French or foreign, was permitted. All British trade, products, goods, and shipping were forbidden on the Continent of Europe. And as Napoleon now controlled most of the coast north of France, beginning with the Netherlands, Denmark, the German states, and now Russia, as well as in the Mediterranean—this caused severe disruption to the British economy. Napoleon, one man, ordered Great Britain to be excluded from the Continent and its commerce.

This was not enough for Napoleon, however, and in 1807, he created the Army Observation Corps of the Pyrenees, and named the unstable General Andoche Junot to command it, the worst possible choice (that commander soon abandoning his army in mid-battle). The purpose of this new army: to invade and secure Portugal, and then to invade and occupy Spain, and, in August 1807 Portugal was indeed invaded, and then Spain in February 1808 followed suit. He would set up his puppet governments in those two countries, as he had already done elsewhere in Europe. Napoleon mistakenly thought the occupation of Spain would be easy, he being welcomed by the Spanish people. The reality: first he was booted out of Portugal (with help from the English), and from day one in Spain he found his armies bogged down in bitter guerrilla warfare, resulting in heavy damage to cities and staggering civilian casualties. Napoleon’s total miscalculation of his much-vaunted Iberian campaign ultimately saw him withdrawing his entire force from Spain by 1813, leaving behind 250,000 French coffins. His intention of occupying Spain and then crossing into North Africa to march on Constantinople was another dashed fantasy. He had learned nothing from his earlier Egyptian fiasco. (The defeated Russians withdrew from Afghanistan, their Spain, in 1988-89.)

Meanwhile, today, the Russian army, assured by Putin of a warm welcome by a grateful Ukraine, instead finds itself fighting another desperate Spanish-like guerrilla war by an equally determined people. Moreover, by 1812 Napoleon had found himself facing a unified, hostile, resentful Europe, much as Putin now faces an equally hostile unified NATO and European Union. Napoleon was as astonished then as Putin is today—how could they!, he threatened, again as Putin does today.

Similarly, Napoleon found Talleyrand and his security-police chief, Fouché, plotting behind his back, negotiating with the enemy—the English. As a result of recent setbacks, Putin wraps himself in paranoia and delusion, even wary of his personal staff and closest supporters, isolating himself more and more in the Kremlin, separated from his own inner council by a 25-foot table. Napoleon physically isolated himself from his court and senior officials, retreating to the Élysée Palace and St Cloud, culminating in a series of disastrous decisions made without consultations—he kidnapped Pope Pius VII and imprisoned him in France, invaded Iberia, and launched another campaign in central Europe. One bad decision followed another, all the while alienating more of his neighbors. Even as Napoleon’s armies were sinking deeper and deeper into defeat in Spain by 1812, that same year he opened a second front, assembling another 600,000 men, mostly from his captive “allies,” to invade Russia (for conspiring with England against him). By the end of 1812, Napoleon returned to Paris from Moscow with less than 25,000 men! His Grande Armée had been wiped off the face of the earth. That did not prevent this great “military genius” from launching yet another senseless war a few months later, however, his Saxon campaign into the German states, resulting in his ignominious defeat at Leipzig in October 1813, with 75,000 French casualties. By now an even more solidly unified, and thoroughly outraged, Europe had had enough of this European Marauder’s constant threats and attacks devastating their cities and lands, as their armies closed in on Paris.

Napoleon was fortunate. His civilized enemies merely sentenced their prisoner to exile at Elba. Putin, already the pariah of Europe and the world, will end the pariah of the Russian people, seeking a scapegoat for their woes. Putin’s final sentence will be not merely a fall from power, but probably death, like Mussolini and Ceausescu before him, at the hands of his own people, the Russians. Napoleon destroyed everything he touched. Putin’s amorality and arrogance repeating Napoleon’s rampaging egotism, his lust for unlimited power, conquest, obedience, and self-destruction, is willing to destroy anyone and anything that gets in his way. Napoleon’s legacy—the smoldering ruins of cities and villages, hundreds of thousands of refugees trailing from one end of Europe to the other, a shattered French national economy, and one million dead Frenchmen. Après moi Le Grand Déluge des Déluges . . .

Unfortunately, today in Ukraine, close to two million civilians have already had to flee, abandoning their homes with their children, left destitute of everything, all because one madman wants to take everything away from them. The name for this is sadism. A couple of weeks ago, they were still living in those homes, little suspecting the Armageddon that was about to engulf them, change their lives forever. Most of their homes now lay desecrated, forever reduced to débris beneath Russian jackboots and tanks. Both Putin and Napoleon have succeeded in so outraging their neighbors as to unify the whole of Europe against them, becoming the pariahs of the civilized world, a most remarkable feat, achieved only once before, by Adolf Hitler. The Roman Catholic Church excommunicated Napoleon, the Russian Orthodox Church remains silent, maintaining Putin as one of their faithful. The only great difference between these two insane men, Napoleon left destroyed towns behind as unintentional collateral damage while attacking an opposing army, Putin bombards one city after another as his principal objective, for the sheer pleasure of doing so, to satisfy his sadism. History will never forget Russia’s unique contribution to Western Civilization, the war lover Putin, Putin the devastator of families, Putin the bomber of nuclear power plants, maternity hospitals, and kindergartens. The Russian people must be very proud.